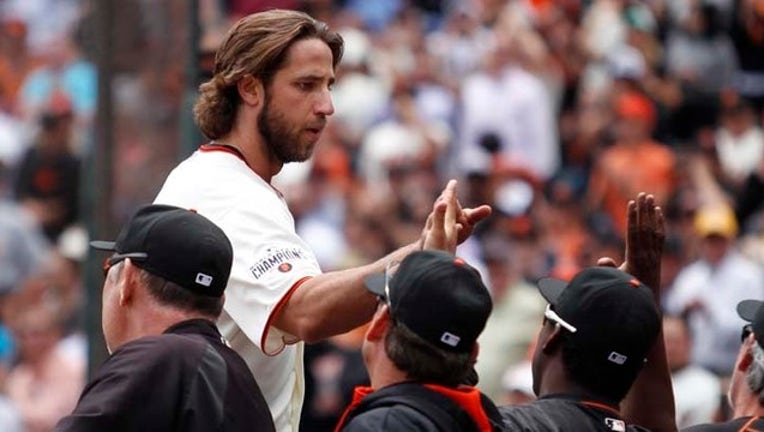 SAN FRANCISCO (AP) — Madison Bumgarner homered off Clayton Kershaw and once again outpitched the reigning NL MVP and Cy Young winner, too, as the San Francisco Giants shut out the Los Angeles Dodgers for the third straight day, 4-0 Thursday.

San Francisco outscored the Dodgers 10-0 in sweeping the three-game series. The champion Giants have won six in a row overall.

This was the third time this season that Bumgarner, the current World Series MVP, had started against Kershaw — the Giants have won all three.

Bumgarner (5-2) worked around seven hits and two walks in 6 1-3 innings, striking out six. He improved to 9-3 in his last 13 starts against the Dodgers.

Bumgarner became the first pitcher to homer off Kershaw (2-3). The Giants' star connected for his seventh career home run, hitting a solo shot into the left field bleachers in the third.

Last year, Bumgarner hit four home runs, including two grand slams. He had managed just one single in 17 at-bats this year going into the game.

The Dodgers haven't scored in 31 innings. The last time they were blanked in three straight games was June 2012 by San Francisco.

The Giants have won all six games between the teams at AT&T Park this year, matching their longest home winning streak against Los Angeles in 41 years.

Kershaw allowed four runs on seven hits and two walks in 7 1-3 innings. He has a 4.32 ERA this year.

Kershaw lost for the third time in 13 starts in San Francisco. He entered the game with a career 0.97 ERA at the Giants' park.

Angel Pagan slid home on Pence's single in the fourth. The play was reviewed and stood as called.

Buster Posey singled in the eighth to extend his hitting streak to 13 games and end Kershaw's day.

Pence and Brandon Crawford drove in runs in the eighth.

Dodgers: LHP Hyun-Jin Ryu underwent surgery on his left shoulder and will not pitch the rest of the season. Manager Don Mattingly said the surgery "went as well as could be expected." He also expects Ryu to be ready to pitch again by spring training.

Giants: RHP Jake Peavy (back tightness) will begin his rehab assignment with a start for Class A San Jose on Friday. He's scheduled for a second start in Triple-A Sacramento on Wednesday. "It's good to get his rehab going," manager Bruce Bochy said. "He feels good and he's got his strength back." . RHP Matt Cain (flexor strain) threw breaking balls on flat ground. His next step will be to throw a bullpen session.

Dodgers: RHP Zack Greinke (5-1, 1.52) will start Friday against the San Diego Padres. Greinke is coming off his first loss but the Padres are a perfect foil for him. He's 5-0 with a 1.58 ERA in nine career starts against them. He's allowed one earned run in 13 innings against the Padres this year.