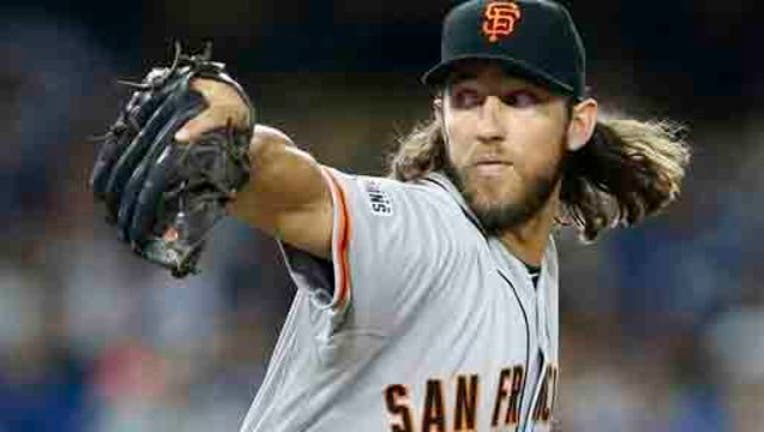 Bumgarner (2-1) gave up a run and five hits, struck out nine and walked one while throwing 110 pitches. Last year's World Series and NLCS MVP is 3-1 lifetime against Kershaw, who was his mound opponent six nights earlier in San Francisco when neither got a decision in the Giants' 3-2 win.

Santiago Casilla pitched a perfect ninth for his sixth save in seven chances.

Kershaw (1-2) allowed two runs and seven hits over seven innings before he was lifted for a pinch-hitter.

The reigning NL MVP and three-time Cy Young Award winner, coming off his fourth consecutive major league ERA title, was trying for his 100th regular-season victory. Kershaw was 1-2 with a 1.95 ERA in his four previous starts against Bumgarner.

The Dodgers, playing without injured corner outfielders Carl Crawford and Yasiel Puig, had a starting outfield of rookie Alex Guerrero in left, rookie Kike Hernandez in center, and Scott Van Slyke in right.

The trio was a combined 3 for 11. Guerrero took over for Carl Crawford, who was placed on the 15-day disabled list before the game because of a torn right oblique muscle.

Regular center fielder Joc Pederson and first baseman Adrian Gonzalez were rested against the left-hander. So was left-swinging outfielder Andre Ethier, who has been playing regularly in place of Puig. Gonzalez is 4 for 35 against Bumgarner and Ethier is 3 for 24.

Kershaw worked with runners on base in each of the first five innings. The Giants took the lead in the first when Angel Pagan lined a two-out double off the fence in left and scored on Posey's single.

Posey, who came in with a .177 career average against Kershaw, ended an overall home run drought of 49 at-bats by driving the left-hander's first pitch of the fourth inning to left-center for his third of the season, helping end the Dodgers' eight-game home winning streak.

The Dodgers responded in the bottom half with a leadoff single by Jimmy Rollins, followed by Hernandez's double off Pagan's glove in center field as he misjudged the ball on the warning track. Rollins scored one out later on a fielder's choice grounder by Howie Kendrick.

Giants: RHP Matt Cain, who has been on the DL since the start of the season because of a strained right flexor tendon, played catch in the outfield.

Dodgers: Closer Kenley Jansen threw 20 pitches in a simulated game, the last one clocked at 96 mph. "I would say I'm on schedule," said Jansen, who had surgery in February to have a benign growth removed from his left foot. "There's no 'ahead of schedule,' because the injury I was dealing with is the kind of thing you don't want to play around with. So I've just got to wait for the 12 weeks to be over with, and then I'll probably get activated." ... LHP Hyun-Jin Ryu (shoulder impingement) threw 25 pitches during a bullpen session and will have another one on Friday.

Giants: RHP Ryan Vogelsong (0-1) makes his third start of the season and second straight against the Dodgers, after giving up two runs over six innings in a no-decision last Thursday in San Francisco. The runs came on homers by Guerrero and Gonzalez.