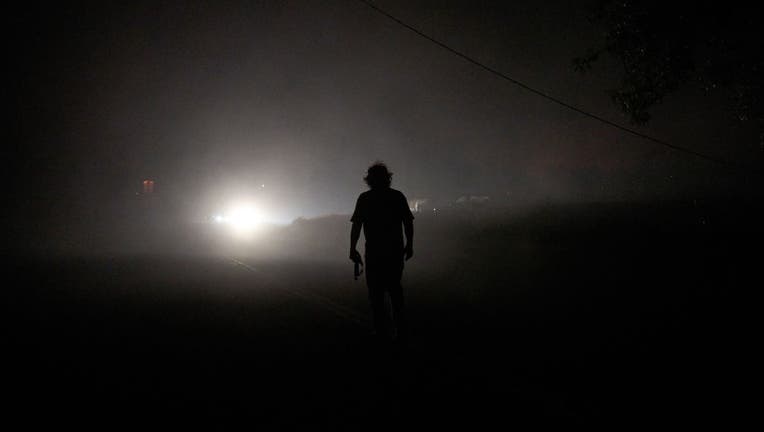 TOPSHOT - Homeowner Tom Smith walks away from the fire near his home on Platina Road in Igo, on September 27, 2020. - The Zogg Fire went from 400 acres to 7000 acres in a matter of hours, prompting mandatory evacuations in the region. (Photo by allis

SHASTA COUNTY, Calif. - Fire investigators looking into what caused a wildfire that killed four people in far Northern California have taken possession of equipment belonging to Pacific Gas and Electric, the utility has reported.

PG&E said in a filing Friday with the Public Utilities Commission that investigators with the California Department of Forestry and Fire Protection seized some of its electrical equipment near where the Zogg Fire started Sept. 27.

The fire erupted in Shasta County during high winds and quickly grew, killing four people in the community of Igo, population 600. It later spread to neighboring Tehama County. As of Friday, it had scorched 88 square miles and destroyed more than 200 buildings, about half of them homes. It was almost fully contained.

The utility said it does not have access to the evidence collected by Cal Fire, which has yet to determine a cause for the fire.

PG&E, the nation’s largest utility, recently emerged from bankruptcy stemming from financial fallout from several devastating wildfires caused by its utility equipment that killed more than 100 people and destroyed more than 27,000 homes and other buildings in 2017 and 2018.

Customers in the area where the fire started, near Zogg Mine Road and Jenny Bird Lane north of Igo, are served by a 12,000-volt PG&E circuit. On the day the Zogg Fire began, the utility’s automated equipment in the area “reported alarms and other activity between approximately 2:40 p.m. and 3:06 p.m.,” PG&E told regulators. The line was then de-activated.

The Shasta County Sheriff’s Office identified one of the victims as Alaina Michelle Rowe, 45, who was found dead along a road on Sept. 28. The sheriff’s department said another victim was a minor but did not report the identity. KRCR-TV in Redding reported that Rowe and her eight-year-old daughter Feyla died as they tried to escape the fire.

In June, Pacific Gas & Electric confessed Tuesday to killing 84 people in one of the most devastating wildfires in recent U.S. history during a dramatic court hearing punctuated by a promise from the company’s outgoing CEO that the nation’s largest utility will never again put profits ahead of safety.