Cal/OSHA has cited six Bay Area employers including hospitals, skilled nursing facilities and a police department for failing to protect their employees from COVID-19. The employers listed below were cited for various health and safety violations including some classified as serious, with proposed penalties ranging from $2,060 to $32,000.

The employers were cited by Cal-OSHA for various health and safety violations including some classified as serious, with proposed penalties ranging from $2,060 to $32,000, the agency announced on Tuesday.

Overall, the six Bay Area employers were ordered to pay fines for not protecting workers from exposure to COVID-19 because Cal-OSHA said they did not take steps to update their workplace safety plans to properly address hazards related to the virus. Each employer has the right to appeal the citation.

The Santa Rosa Police Department had the highest fine amount and three serious violations, stemming from the death of a department employee who succumbed to coronavirus on March 31, according to Cal-OSHA spokeswoman Erika Monterroza. Marylou Armer had been exposed at work to a colleague who had known symptoms of COVID-19, Cal/OSHA disclosed for the first time.

She was also the first known peace officer in California to have died from complications of COVID-19. Several other police employees also contracted the virus after her death. In addition, Cal-OSHA officials did not learn of her death until two weeks afterward.

In March and April, some police department employees with virus symptoms were allowed to go to work despite orders from state and county health officials that recommended employers tell such workers to stay home, Cal/OSHA said in its announcement.

“The Santa Rosa Police Department failed to implement required screening and referral procedures for persons exhibiting COVID-19 symptoms during the month of March 2020, and failed to report to Cal-OSHA multiple serious illnesses suffered by employees who contracted COVID-19,” the agency said in the statement.

In response, Santa Rosa spokeswoman Adriane Mertens told KTVU that the city received the actual citations on Wednesday, a day after the Department of Industrial Relations news release. She said Santa Rosa has not yet received the investigation report, which she said would provide background information on how Cal-OSHA arrived at its findings.

"The city will be thoroughly reviewing all documentation to determine next steps in response to the citations," Mertens said in an email. 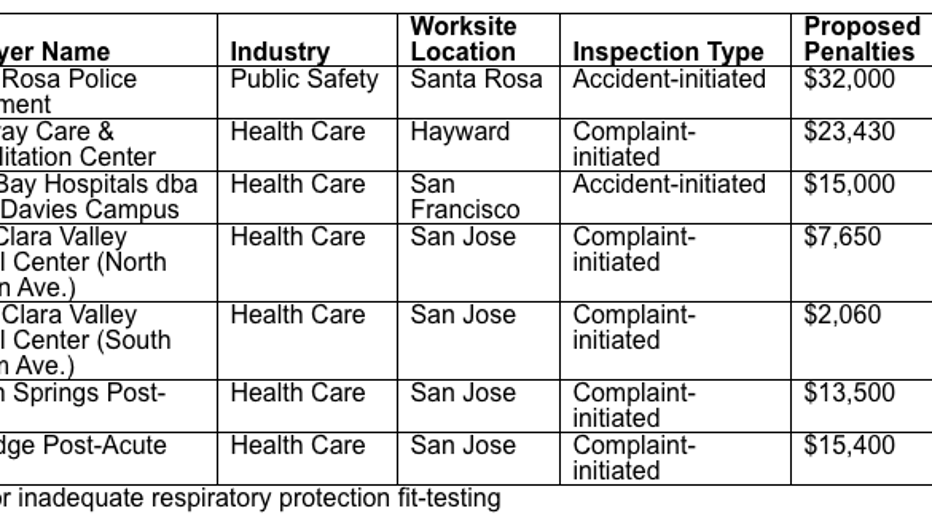 But until Santa Rosa sees the details, the city issued a statement saying that it is their understanding that the citations were based mainly on events in late February and March, "before information about the nature and extent of COVID-19" was known. At the time, the city said the police department "complied in a timely fashion with all requirements and guidelines issued by the County of Sonoma Health Officer and the CDC."

The city also pointed out that a total of nine SRPD officers tested positive for COVID-19 in March, but since then, no other police department employee has tested positive.

There were other employers cited, too.

Some well-known problems occurred at the Gateway Care and Rehabilitation Center in Hayward, where at least six patients died and more than 50 people got infected.

Cal-OSHA investigators said they determined that the skilled nursing facility in Hayward exposed nurses and housekeeping workers to COVID-19 and failed to follow requirements for providing necessary personal protective equipment. At least one family has filed a wrongful death suit against the center.

Other citations were sent to Sutter Bay Hospital at the CPMC Davies Campus in San Francisco where workers and security guards were not always wearing respiratory protection; and the Canyon Springs Post Acute healthcare center, the Ridge Post-Acute healthcare center and Santa Clara Valley Medical Center, all in San Jose. None were immediately available for comment.

Specifically, at Santa Clara Valley Medical Center, Cal-OSHA investigators found that the hospital did not provide effective training for its employees and failed to provide clear communication to their health care workers who were deployed to two skilled nursing facilities.

Cal-OSHA pointed out that all employers, especially if high-risk public service, must ensure workplace safety for their employees.

“Workers in health care and public safety are at a higher risk of exposure to COVID-19 and employers must put in place measures to protect these essential personnel,” said Cal/OSHA Chief Doug Parker.