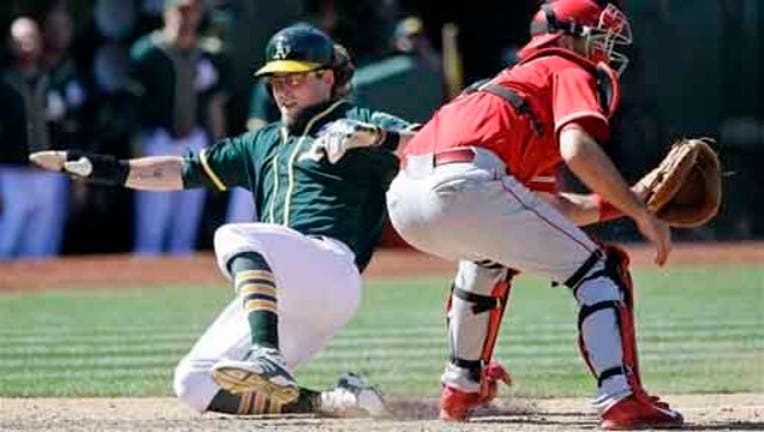 OAKLAND, Calif. (AP) — Kole Calhoun had two hits and three RBIs, Garrett Richards took a shutout into the seventh inning, and the Los Angeles Angels held on to beat the Oakland Athletics 6-5 Thursday.

Erick Aybar, Johnny Giavotella and David Freese also drove in runs for the Angels, who have won five of seven to end April with a .500 record (11-11).

Mark Canha drove in three runs, two on a homer, as the A's lost for the sixth time in seven games, matching their worst start in Oakland history at 9-14.

Richards, making his third start after opening the season on the disabled list, was pulled after Josh Reddick singled to open the seventh, and was charged with a run after Canha's home run off Mike Morin.

Vinnie Pestano started the ninth by walking Billy Butler and giving up a single to Reddick. Huston Street came on and gave up run-scoring singles to Brett Lawrie and Canha. He walked pinch-hitter Stephen Vogt to load the bases before getting pinch-hitter Max Muncy on a pop up.

Sam Fuld followed with another RBI single. Street, who allowed his first runs of the year, got Marcus Semien on a popup before Ike Davis hit a ball to deep center that Mike Trout caught before hitting the wall to give the closer his ninth save.

Calhoun, batting cleanup in the absence of Albert Pujols, drove in two runs in the fifth after Trout, who added two hits and was on base four times, was walked intentionally.

Calhoun improved to .438 hitter (7 for 16), with seven RBIs, in eight games batting fourth.

Angels: Pujols was out of the lineup with a sore hamstring suffered late in Wednesday night's victory over the A's. Manager Mike Scioscia said the team would re-evaluate him daily.

Athletics: LHP Sean Doolittle (strained left rotator cuff) threw 25 pitches and felt fine. He will throw another bullpen on Sunday. ... RHP Jarrod Parker (Tommy John surgery) is scheduled to make his next rehab start with Triple-A Nashville. ... Canha returned to the lineup after missing a few days with an illness.

RHP Mike Morin (1-0), who struck out the only batter he faced, became the official winning pitcher of Wednesday night's 6-3 victory over the A's. The victory was incorrectly awarded to RHP Fernando Salas, who threw a scoreless inning after taking over for Morin. Salas (0-1) does get credit for a hold.