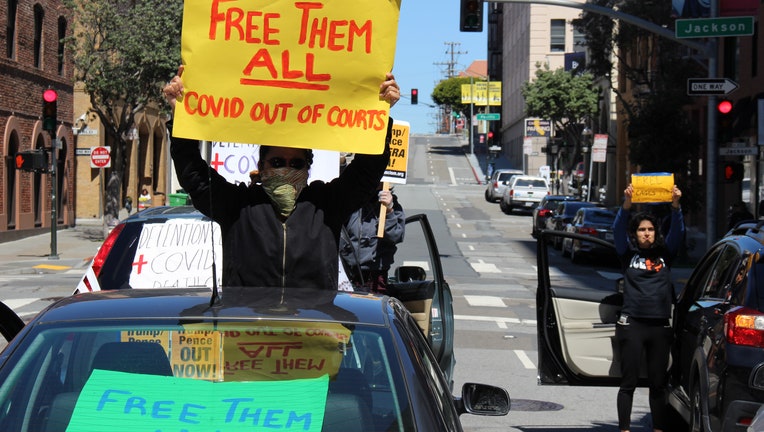 In a letter to Acting Secretary of Homeland Security Chad Wolf, Becerra said that detainees should be "immediately" released if they pose no risk to public safety, have no significant criminal histories or pending charges, or are in fragile health.

Many detained immigrants have no criminal histories and others are new arrivals seeking asylum, Becerra said.

“Our communities are facing an unprecedented threat, and all of us must take affirmative steps to minimize it,” Becerra said in a statement. "Failure to act will not only harm immigrants in civil detention, it could also impact community hospitals that will need to mobilize a medical response if nothing is done.”

Immigration and Customs Enforcement spokesman Jonathan Moor did not have an immediate comment. But he added he would provide more information at a later date.

Moor also did not have an exact count on Monday as to how many ICE detainees in Northern California have been released as they await various legal proceedings.

But there have been at least five people who have been released within the last week due to health concerns amplified by the coronavirus outbreak.

Alameda County Public Defender Brendon Woods on Monday cheered the decision by U.S. District Court Magistrate Laurel Beeler this weekend, who ordered the immediate release of an Oakland man because COVID-19 has made conditions too dangerous at a California immigrant detention center.

The man, who is a lawful permanent resident, can now shelter in place with his wife, instead of being confined in the Yuba County Jail. According to Beeler, the man cannot “meaningfully protect himself at [the jail] from the risks of his custody.”

“The virus has made conditions inside detention life-threatening. Cots within three feet of each other, cramped dining tables, insufficient soap and infrequent cleaning of high-touch surfaces like sink faucets and tables,” said Julia Rabinovich, a lawyer with the Public Defender’s Immigration Defense practice who represents the man. “It is a matter of when, not if, this deadly virus will spread throughout Yuba County Jail.”

The move follows a similar one made last week by U.S. District Judge Maxine Chesney in San Francisco, who ordered the release of four detainees at ICE facilities in Marysville and Bakersfield.

Chesney said undisputed evidence in the case showed the detainnes did not have access to protective social distancing or masks. She said the risks they face amount to unconstitutional conditions of confinement.

The four were among 13 who sued ICE in a habeas corpus lawsuit in March, seeking their immediate release.

One family in Southern California would like to see a similar fate for an ailing relative who is facing deportation.

Henry Guevara,  an American citizen who served with the Marines in the Iraq War, is trying to get ICE to release his father to him in Santa Clarita, Calif., pending deportation hearings.

This month, Guevara sent a letter to ICE promising that he would take care of 79-year-old Jose Luis Lopez Guevera, who recently had heart surgery and is in deteriorating health. His father also has chronic arthritis, high blood pressure and experiences shortness of breath, Guevara said.

Jose Guevara is lawful permanent resident from El Salvador who served a 39-year prison sentence for a murder conviction. His son, who was a child at the time, describes the killing as stemming from an ongoing feud with an enemy.

His father was paroled in February 2019, according to his Oakland-based lawyers at Centro Legal de le Raza. If he had been an American citizen, the elder Guevara would now be free, but instead was taken into custody by ICE.

Although his case doesn't fit cleanly under the conditions in Becerra's letter, Guevara said in his letter that his father deserves leniency on  "urgent humanitarian reasons."

Henry Guevara became a Marine, in part, to right his father's wrongs.

The younger Guevara claimed his father is no longer a risk and had completed self-help and anger management programs in prison. He also took vocational classes and became a welder.

"He served his time," Guevara said.

Guevara realizes that people may be angry or indifferent to his calls to release his father. He acknowledges that he father committed a "horrible" crime.

But he feels that he has worked hard to offset his father's wrongdoings and make the world a better place.

"I feel I paid back my father's debt to society by becoming a Marine and  a veteran," Guevara said. "I apologize for my father's actions. And I offered up myself."