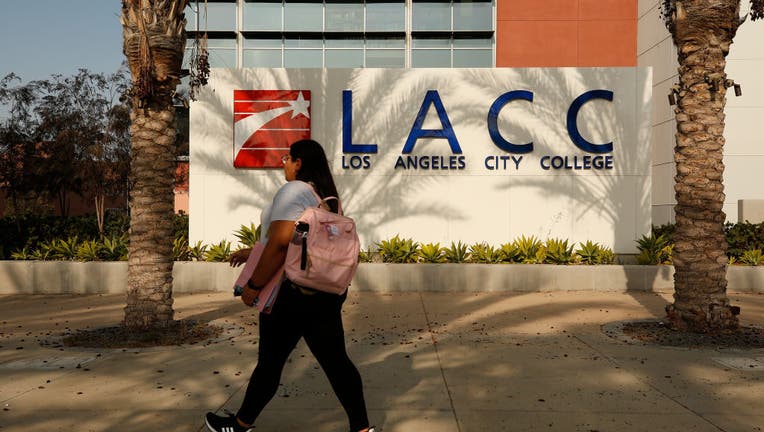 LOS ANGELES, CA - AUGUST 30: A portion of the enrolled student body returns to in-class instruction for the reopening on Monday August 30th of Los Angeles City College (LACC) in the LACCD, the nation's largest community college district. School will

LOS ANGELES - Officials have detected more than 65,000 fake financial aid applications to California community colleges in what is believed to be a massive attempted financial aid scam.

The Los Angeles Times reports Thursday that the fraudulent applications were filed at most of the system's 116 campuses on behalf of first-time applicants who were older than 30 and earned less than $40,000. A student aid official detected the applications on a routine check of federal financial aid records while faculty members were flagging unusual surges in class enrollment that they suspected could be driven by fake students or bots.

"We were kind of scratching our heads going, ‘Did or didn’t 60,000 extra older adult students really attempt to apply to community colleges here in the last few months?’" said Patrick Perry, director of policy, research and data for the California Student Aid Commission, who alerted college officials to the issue last week.

Since then, Perry said the number of suspected fake applications has exceeded 65,000. He said he believes the problem was caught before significant amounts of aid were distributed to scammers.

Officials at California Community Colleges declined to say whether financial aid was disbursed to fake students. The system, which has received more than $1.6 billion in emergency COVID-19 relief for low income students, is investigating.

The U.S. Department of Education’s Office of Inspector General is also investigating and declined comment.

The fake applications were detected at 105 campuses. The largest numbers were reported at Cerritos, Pasadena, Chaffey, Merced and Antelope Valley.

Two professors at San Joaquin Delta College in Stockton said they became suspicious upon seeing their online class enrollment surge in early August, including many students who were taking classes unrelated to their major. They later noticed many of the suspicious students didn't have phone numbers or had out-of-state area codes.

"It looked like we were making a comeback in spite of the pandemic," said Tara Cuslidge-Staiano, a journalism professor who believes more than two-thirds of her 60 class members are bots. "The hardest part of all of this is that we’re not doing as well as we thought we were doing."

About 20% of recent traffic on the colleges' main page for online applications was "malicious and bot-related," she said, adding that much of this traffic was detected by software installed by the college system in July.