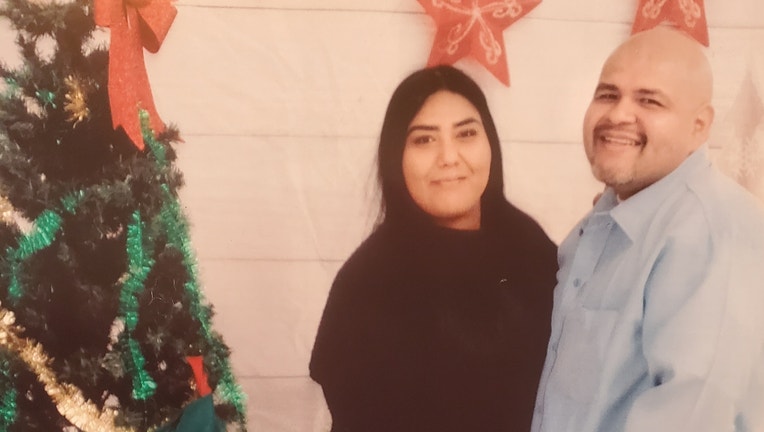 Like any couple in love, Nicole Gortarez and Alfonso Velasquez want to say their vows.

COALINGA, Calif. - Like any couple in love, Nicole Gortarez and Alfonso Velasquez want to say their vows.

And while the pandemic has put a damper on countless traditional weddings because of guest size limits, this pair's situation is anything but regular.

Gortarez is a social worker who has relocated to Arizona. And Velasquez is an inmate at Pleasant Valley State Prison in Coalinga.

And without much explanation, they have been told by the California Department of Corrections and Rehabilitation that they are not allowed to get married, either in person because of coronavirus, or virtually, over video.

"I want to get married as soon as possible," Gortarez said.

She doesn't think she's asking for too much. It's not like she expects an in-person wedding as the pandemic sweeps through the nation and has hit prisons especially hard. But she's already paid the $258 prison marriage fee and is asking simply to be married by video. She and her fiance were just granted video calling privileges for Christmas, so she's not sure what the issue would be if they wanted to say "I do" on that call with a prison marriage coordinator at her future husband's side.

She is especially confused because on April 30, Gov. Gavin Newsom signed an executive order allowing marriages to take place via video-conferencing during the pandemic. The order doesn't expire until further notice.

Gortarez showed KTVU an email that the Fresno County clerk sent her, saying that before the pandemic, someone from the prison system would come down with the completed license paperwork, which the clerk would process. The clerk said he wasn't sure why no one from the prison was doing that now.

Alia Cruz, a spokeswoman for CDCR, did not explain why video weddings are not an option at this point, although she did say all weddings have been banned, both in person and virtually, since March 11 in an effort to stop the spread of coronavirus.

Cruz wrote in an email that the agency is "actively working on procedures for institutions to be able to conduct marriages via video conferencing during non-visiting hours." But she added: "We do not currently have a time frame for when they may begin."

Cruz that in-person marriages will not be permitted until in-person visitation can be safely resumed. Late Friday afternoon, the prison put out some guidance for future video weddings but was not specific about when the virtual prison ceremonies would occur.

Prisons have been on coronavirus lockdowns as the disease has ravaged the globe. As a result, privileges in prisons, such as visiting, going to the commissary and even video calls, have been suspended during much of this time.

It's unclear if any of the rules against video weddings might have to do with letting inmates out of their cells.

But Gortarez doesn't know why that should make a difference. As of the end of November, video calls have since resumed at Pleasant Valley State Prison. In fact, she even has a scheduled video call with her fiance on Christmas Day.

As for why she just couldn't get married on that call with her own minister at her side in Arizona?  Gortarez said that the prison system has strict rules about accepting marriages as valid and in their eyes, she said, that type of union wouldn't count.

Prisons across the country have allowed sporadic weddings during COVID-19.

Gortarez has been citing this wedding in "about 100 emails to higher-ups," lawmakers, prison officials and the Office of the Inspector General, all to no avail.

She is determined to get married now to Valesquez for both emotional and practical reasons.

Specifically, Velasquez needs to prove to prison authorities that he has a family member - namely her - living in Arizona when it is his time to be released in 2022.

He is in custody on domestic violence and great bodily injury charges stemming from a family brawl, she said.

But the two met through mutual friends, fell in love and have been together for five years. He is the type of man who never forgets a birthday and sends cards to her and her children, who she said, adore him.

But mostly, she wants to get married now because of how she feels about Velasquez.