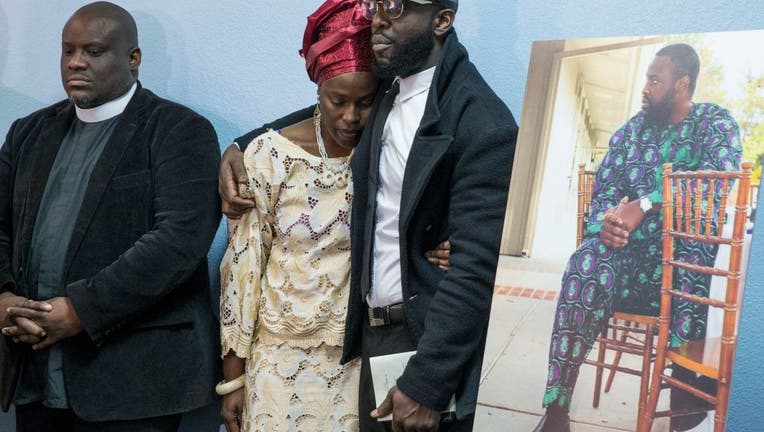 Pastor Michael McBride, left, stands near Ekene Okobi, center, and Tobenna Okobi, siblings of Chinedu Okobo, during a press conference held by Attorney John Burris calling for an investigation into the death of Chinedu Okobi at the hands of San Mateo

Democratic Assemblyman Phil Ting said the crime is arbitrarily enforced, most often against people of color — sometimes leading to deadly confrontations with police.

"Unequal enforcement of jaywalking laws and the use of minor offenses like it as a pretext to stop people of color, especially in under-resourced communities, is unacceptable and must be addressed," Newsom agreed in his veto message.

But the governor noted that the most populous state has the nation’s highest number of pedestrian deaths and ranks 8th per capita. Moreover, 63% were from pedestrians ignoring traffic controls or safety laws.

Newsom said he will work with lawmakers to find legislation that "addresses the unequal enforcement of jaywalking laws in a manner that does not risk worsening California’s pedestrian safety."

"A person shouldn’t be killed for jaywalking, for being homeless or for having mental illness," John Taylor, one of the family’s attorneys, said as they filed a wrongful death claim.

Ting also referenced two other recent cases of Black men confronted by police over jaywalking: Chinedu Okobi died from cardiac arrest in 2018 after a struggle with San Mateo County deputies, while in 2017 Nandi Cain survived a violent arrest by Sacramento police after he challenged an officer to fight.

Cain’s lawyer, John Burris, said at the time that his client was guilty mainly of "walking while Black."

Ting cited 2018-2020 data compiled by the California Racial and Identity Profiling Act showing that Black people were up to 4 1/2 times more likely to be stopped for jaywalking than white people, depending on the community.

A base ticket is $197 ticket, but related fees can bring it to hundreds of dollars, which Ting said is too much for a relatively minor infraction.

Ting’s bill would still require pedestrians to act cautiously, and police could have cited someone they see crossing when it is unsafe to do so.

But the California State Sheriffs’ Association said that standard would have made it less clear when the law was being violated and thus led to more disparities in enforcement and more problems on the road.

"Allowing pedestrians to enter roadways at effectively any place or any time where no ‘immediate hazard exists’ will cause confusion and remove expectations drivers and pedestrians may have about safe roadway usage," the sheriffs said.

Legislative analysts said the prohibition dates from the 1910s and 1920s, when rising pedestrian deaths sparked a backlash against the new automobile. Even the term jaywalking was used to shame individuals crossing outside a crosswalk — the term "jay" a the time referred to a "rube" or "hick."

Virginia this year became the first state to decriminalize jaywalking.