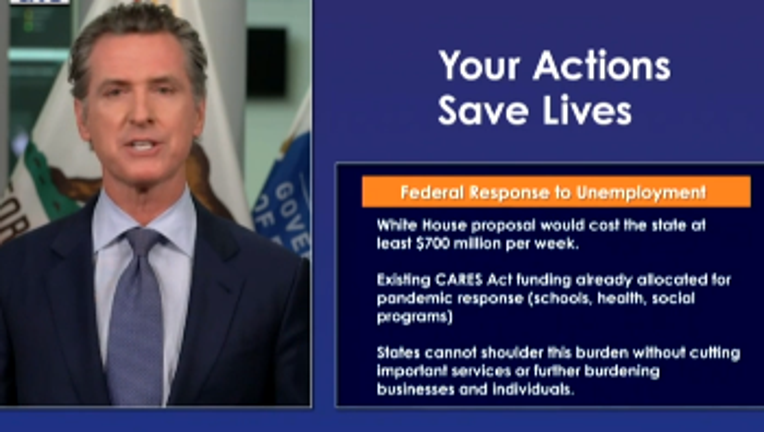 "There isn't enough money sitting in the piggy bank," he said.

In an effort to bypass congressional negotiations and extend financial relief to tens of millions of Americans during the coronavirus pandemic, Trump signed an executive order that would extend unemployment benefits at a reduced rate of $400 a week, down from the $600 a week that expired July 31.

Newsom said a 25% unemployment assistance contribution from California would amount to $700 million a week.

"States cannot shoulder this burden without cutting important services," Newsom said, adding California needs the federal government to put up that 25% assistance. "Otherwise we are putting forth false commitments and promises."

Over the weekend, Trump touted his order.

“It's $400 a week, and we're doing it without the Democrats,” Trump said at his private country club in Bedminster, New Jersey, asking states to cover 25% of the cost. Trump is seeking to set aside $44 billion in previously approved disaster aid to help states maintain supplemental pandemic jobless benefits, but Trump said it would be up to states to determine how much, if any of it, to fund, so the benefits could be smaller still.

Democrats had said they would lower their spending demands from $3.4 trillion to $2 trillion but said the White House needed to increase their offer. Republicans have proposed a $1 trillion plan.

Newsom also addressed California's actions on state evictions. An executive order he signed that prevents evictions can expire as early as Aug. 14. He said he is working with the Judicial Council, landlords and other stakeholders to continue protecting vulnerable tenants and renters. About 75% of the renters who have fallen behind on rent are Latinx and Black: 62% are Latinx and 9.5% are Black.

Newsom's comments come a day after Dr. Sonia Angell said she’s departing from her role as director and state public health officer at the California Department of Public Health. Her letter to staff, released by the California Health and Human Services Agency, did not give a specific reason for her departure.

But her departure comes shortly after California Health and Human Services Secretary Dr. Mark Ghaly said a technological glitch caused up to 300,000 coronavirus records to be backlogged, though not all were coronavirus cases and some could be duplicates. The problem affected the California Reportable Disease Information Exchange, also known as CalREDIE.

Newsom would not say whether the problems had anything to do with her departure, saying he would not discuss personnel issues publicly, and ultimately, the "buck stops" with him.

Much of California’s COVID-19 testing backlog processed over weekend

The state of California says it is getting back on track after an error in the state's testing data was disclosed last week. The governor said they were able to crunch a lot of that data over the weekend and are in the process of catching up.

On Monday, Ghaly said all these backlogged cases have been processed over the weekend, and now, the data will go to the local county health officers before coming back to the state lab. The process should take a maximum of three days.

Health experts say testing will be critical to tracking and combating COVID-19, which made the disclosure of the glitch so alarming.

Newsom acknowledged how difficult the last couple weeks have been for the state, the public and county health officials regarding these problems.

“We have had a little bit of trouble” with coronavirus data collection, Newsom said. California's IT is “incapable of meeting this moment let alone the pre-COVID moment," even though reporters brought up that the problem was likely a human error.