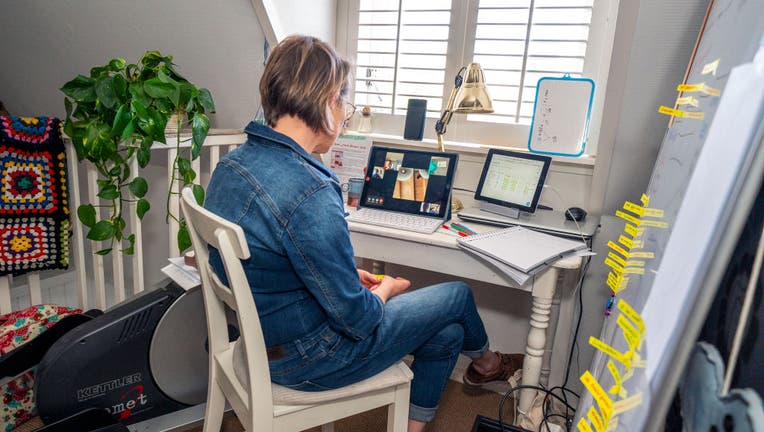 FILE - A teacher works from home, communicating with her pupils through video and voice dialling, amid the coronavirus outbreak. (Photo by Douwe Bijlsma/BSR Agency/Getty Images)

SACRAMENTO, Calif. - California Gov. Gavin Newsom - and the father of four children - tackled the issue of schools on Friday, saying that he was hopeful that while education will be modified because of coronavirus, he wanted the year to be as "successful as it can be."

More than 90% of the state's six million public school children will be starting online and away from the classroom, he said, because it's still too unsafe to physically enter the classroom.

Until that time, Newsom said it's important that students get "daily live interaction" and teachers offer "engaging assignments" so that young children aren't left on their own to learn by taped lectures and YouTube videos alone.

"There needs to be dynamic engagement," he said.

State Superintendent Tony Thurmond echoed the governor's call: The need for live instruction and interactions are crucial to someone's social and emotional well being.

"Students can still learn, even under these conditions," Thurmond said.

This issue is playing out in many districts, including Oakland Unified, where teachers and the administration have been negotiating how many minutes of daily live instruction, known as synchronous learning, will be offered.

While the two sides reached a tentative agreement on Wednesday, which has not yet shared with the public, the teachers have argued for less daily live instruction while the district has been pushing for more

The district wanted a 6.5-hour workday, while the teacher's union proposed 5 hours, with 1.5 hours of teacher wellness. The union also asked Oakland Unified to agree to the state’s minimum in distance instructional hours, but the district wants to add 45 minutes to grades 4 to 12.

Los Angeles had a similar negotiation.

But earlier this month, the two sides reached an agreement where students will receive five hours of distance learning.

Each school day will run from 9 a.m. to 2:15 p.m., EdSource reported, and will include a mix of live instruction and independent work. Most students will receive at least 90 minutes of daily live instruction.

Senate Bill 98 requires three hours and 50 minutes a day for instruction in first through third grades and four hours for fourth through 12th grades. The Legislature did not differentiate between live interaction, including small group discussions and teacher’s lessons, and students’ independent work.

For the first week of school, Oakland teachers taught 45 minutes "live" a day, and then school was over for the district's 37,000 students.

While the talk now is centering on distance learning, Newsom said the ultimate aim is to return to the actual classroom when it is safe.

With that in mind, Newsom said the state has already procured more than 18 million masks and face shields, 58,000 thermometers and 1.5 million gallons of sanitizer to distribute when needed, at no cost to districts.