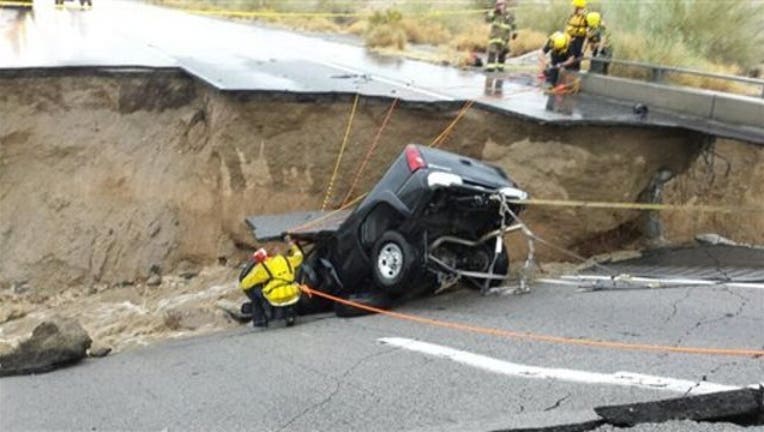 LOS ANGELES (AP) — All traffic along a major freeway connecting California and Arizona was blocked indefinitely when a bridge over a desert wash collapsed during heavy rain, and the roadway in the opposite direction suffered severe damage, authorities said.

The collapse on Interstate 10 in southeastern California Sunday afternoon left one driver injured, stranded numerous motorists and complicated travel for countless thousands for what officials warned could be a long time.

"Interstate 10 is closed completely and indefinitely," said Terri Kasinga, spokeswoman for the California Department of Transportation.

The closure will force motorists seeking to use I-10 to travel between California and Arizona to go hundreds of miles out of their way to Interstate 8 to the south or Interstate 40 to the north.

Busy I-10 is the most direct route between the Los Angeles area and Phoenix. An average of more than 20,000 cars per day pass through the area that is shut down, according to federal highway statistics.

The bridge for eastbound traffic about 15 feet above the wash about 50 miles west of the Arizona state line gave way and ended up in the flooding water below, the California Highway Patrol said, blocking all traffic headed toward Arizona. One driver of a pickup truck that fell with the freeway had moderate injuries, officials said.

The westbound section of the freeway near the tiny town of Desert Center was also closed. The roadway was intact but extremely undermined by flooding and could need just-as-extensive rebuilding, Kasinga said.

No timeframe was given for when either side would reopen as crews were diverted from other projects to examine the site.

"They won't even be able to begin assessing the damage until Monday," Kasinga said.

Transportation officials recommended travelers on the east side of the collapse use U.S. Highway 95 in Arizona to get to the other freeways, and that in California drivers use state routes 86 and 111 to get to Interstate 8 into Arizona.

One driver had to be rescued from a pickup truck that crashed in the collapse and was taken to a hospital with moderate injuries, the Riverside County Fire Department said. A passenger from the truck was able to get out without help and wasn't hurt.

Hundreds of other cars were stranded immediately after the collapse, but the California Highway Patrol was working to divert them in the other direction off the freeway and it wasn't clear if any remained, Kasinga said.

Pamala Browne, 53, and her daughter were driving from Flagstaff, Arizona to Palm Desert, California when they got stranded when the westbound lanes were shutdown.

"Oh my God, we are so stuck out here," Browne told the Desert Sun newspaper. "There's no end to the cars that are stuck out here."

The rains came amid a second day of showers and thunderstorms in southern and central California that were setting rainfall records in what is usually a dry month.

Saturday's rainfall broke records in at least 11 locations, including five places that had the most rain ever recorded on any day in July, said National Weather Service meteorologist Joe Sirard.

July is typically the driest month of the year in Southern California. Because of that, Saturday's 0.36 inch of rain in downtown Los Angeles exceeded the 0.24 inch recorded July 14, 1886, which had been the wettest July day in nearly 130 years.

Meanwhile, the summer storm has helped firefighters advance on two wildfires that broke out Friday.

Muggy, moist conditions were expected to persist through Monday.