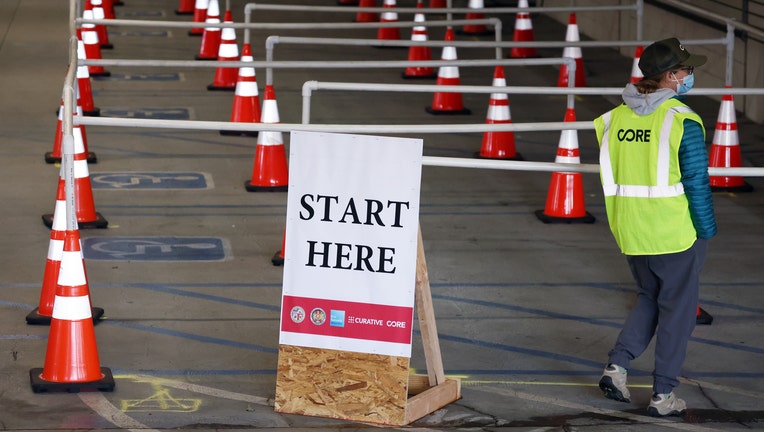 LOS ANGELES, CA - MARCH 11: Core Staff prepares to wrap up for the second day at a new vaccine site at USC which is supplied through the citys doses and will be their 7th site in University Park on Thursday, March 11, 2021 in Los Angeles, CA. The sit

LOS ANGELES - California officials pushed the safety and efficacy of the new one-shot Johnson & Johnson coronavirus vaccine on Thursday as the state looks ahead to drastically loosening restrictions that have altered life in the nation's most populous state.

"The thing that came into my mind when that vaccine went into my arm was hugging my mom again. And I think that is something too many Californians have been without since this pandemic began," said Dr. Nadine Burke Harris, California’s surgeon general, who is African American.

California’s supply of the single-shot vaccine is limited for now but officials are eager to build confidence, particularly in minority communities.

Burke Harris was one of several Black officials and leaders who promoted the vaccine at a federally funded vaccination site in Oakland. She said her mother also received the J&J vaccine this week. Meanwhile in Los Angeles, Dr. Mark Ghaly, the state’s top health official, received the shot in Los Angeles, making a similar push.

Johnson & Johnson’s vaccine is the third vaccine to receive emergency approval in the U.S. The Moderna and Pfizer vaccines both require two shots, while J&J only requires one dose. Although public health officials say it provides strong immunity, some people have been hesitant, worrying that it is not as protective as the others.

"The best vaccine is the first one that's in your arm," said Dr. Tomás Aragón, director of the California Department of Public Health.

The state has tied its reopening plans to getting the most vulnerable residents vaccinated, particularly people in Black and Latino communities and in lower income neighborhoods.

The state uses a four-tiered, color-coded system to determine what businesses can open in a county; purple is the most restrictive, yellow the least. Under the system, counties will be eligible to move to less restrictive tiers once benchmarks are hit for vaccinating people in the most disadvantaged neighborhoods.

When officials established the system in August, Gov. Gavin Newsom said it was too soon to look ahead to a green tier that would signal "go back to the way things were." But as vaccinations increase and cases, hospitalizations and deaths go down, officials are preparing to introduce one, though it's not clear what restrictions would be in place.

The Democratic governor said Wednesday that officials are now working on setting up a green tier "and have been now for a number of months in anticipation of this bright light at the end of this tunnel,."

Aragón, the public health director, said the state is considering when to end the current reopening blueprint. He said the state is likely to achieve herd immunity when about 75% of the population has been vaccinated, but he noted that could change as the virus mutates.

Almost half of the state's 58 counties are out of the most restrictive purple tier. Major counties like Los Angeles and Orange are expected to soon move to the red tier, allowing limited indoor dining and the reopening of movie theaters and gyms.