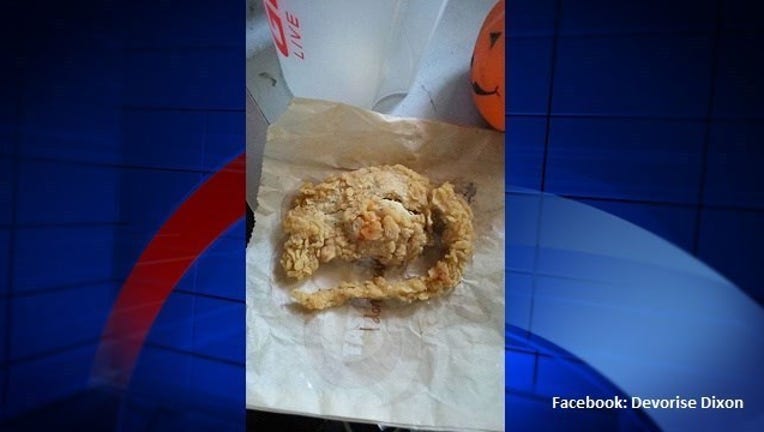 WILMINGTON, CA- A California man has claimed that he received something other than fried chicken after placing an order at KFC.

Devorise Dixon's claim that he was served deep fried rat has taken the internet by storm, after he shared photos and video of his meal on Facebook.

Dixon says he put the item in the freezer and returned to the restaurant with photos and his purchase receipt.

In a Facebook post, Dixon wrote, " Went back to KFC yesterday and spoke to the manager, she said it is a rat and apologized, it's time for a lawyer. Be safe, don't eat fast food."

KFC's Facebook page has been flooded with photos of Dixon's meal, and the company has responded to several posts, saying they are willing to work with Dixon to resolve the situation.

On one occasion KFC responded by saying. " KFC takes customer claims very seriously, and we are trying to investigate this matter. Our chicken tenders often vary in size and shape, and we currently have to evidence to support this claim. We are aggressively trying to reach Mr. Dixon, and we request that he return to the restaurant with the product for testing, or call us at 1-800-Call-KFC."

Later KFC added to their response with the following:

"KFC has made various attempts to contact this customer, but he is refusing to talk to us directly or through an attorney. Our chicken tenders often vary in size and shape, and we currently have no evidence to support this allegation. We have extended the opportunity to have an independent lab evaluate the product at our own expense, but the customer refuses to provide the product in question."