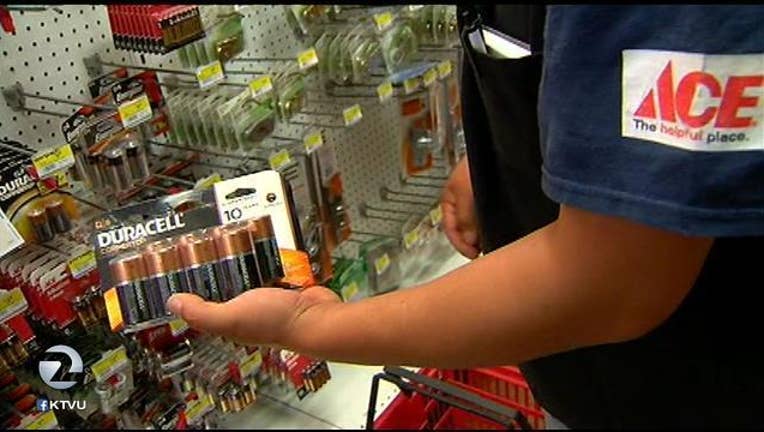 BAY AREA, Calif. (KTVU) - Earthquake Preparedness Agencies in California say the images from quake-devastated Nepal should serve as a wake-up call for us at home.

They're reminding people to be prepared for the next Big One.

Lance Webster, spokesman for the Earthquake Country Alliance, said last year more than 12 million Californians took part in the California ShakeOut, an event designed to increase awareness about how to survive during and after an earthquake.

He said as part of that event, everyone who registers is asked to create an earthquake preparedness kit for their home and workplace, but that there is no way to find out exactly how many people follow through on that promise.

In downtown Hayward there's evidence of the Hayward Fault underneath buildings and along streets.

One 1930s-era solid brick building on Mission and A streets straddles the fault line, and there is a visible warp in the walls of the building where half of it is moving north, the other half south, along the creeping fault line.

Ryan Llana practically grew up in his dad's sign shop, and never paid attention to the warped wall or the concrete floor inside the building that is splitting apart.

The fault-line induced features simply came with the building when he took over his Dad's business a few years ago.

Llana said the thought of an earthquake here is always in the back of his mind - in the way, way back.

"You're so focused on your business, day to day lives. Plus, it hasn't happened in a while," he said.

The US Geological Survey said there is a 30 percent chance of a magnitude 6.8 or greater quake on the Hayward fault sometime in the next 30 years. The last major earthquake there was in 1868. It was estimated to be a 7.0 quake, although the exact magnitude is difficult to pinpoint, since the quake happened before the mechanisms to measure quake size were created.

Based on historical, seismological data, the Hayward fault has a major earthquake once every 140 years.

By that account, a major quake on the Hayward fault is seven years overdue. The Hayward fault goes from Fremont to San Pablo through one of the most densely populated areas in the Bay Area.

The corner of Prospect and Rose streets in Rich Huff's Hayward neighborhood is a popular spot with fault-line enthusiasts and Geology students from Cal State East Bay.

"Every couple of weeks there's a group that comes out here," Huff explained.

The curb of the sidewalk, directly under the creeping fault, is slowly, but visibly, slipping apart.

"I know that it's there," Huff said of the fault-line that runs under his family's home. "I just don't pay attention to it."

As long as the ground's not shaking, the idea of the next Big One is out of sight, out of mind, for many.

"Because of what happened in Nepal, you'd think that would be a big issue now," Llana said.

However,Jim Wieder, owns the Ace Hardware on B St. in downtown Hayward. He has all the supplies for customers to assemble their own earthquake preparedness kits, like fresh water, batteries, gasoline, but in the past 48 hours: "We haven't had one person come in and ask about it," he said.

Even the clerks who help customers find those items, haven't thought about setting some aside for themselves.

Employee, Felipe Hernandez, who, as a child lived through the 1985 8.0 magnitude quake in Mexico City, admitted he hadn't gotten around to making an earthquake kit at home.

According to the Earthquake Country Alliance, the most important item to set aside for the next Big One - is water. The recommendation is to have at least one gallon, per person, per day for at least two weeks.