RIVERSIDE, Calif. - Any High School Varsity Football team with an 11-0 record has reason to be proud, especially if they are one win away from their Division Championship Game for the first time in their High School’s 68 year history.

But this particular school is the California School for the Deaf (CDSR), Riverside, and when you see our story, you will notice that they communicate, between themselves, and their coaches, using sign language.

"We are just like any other team," one player said through an interpreter. "Only better, he said with a laugh.

Considering that their wins have been against all hearing teams, the statement, and their obvious pride, takes on a whole new meeting.

Their coach, Keith Adams, explained that they don’t get any breaks. He has high expectations. They use facial expression, and yes, sign language, which seems to go at a million miles a second.  Their alertness level, when you see a game, is palpable – "we use our eyes more," explained another player.

The Cubs are looking to build off their currently-undefeated 2021 season with an 8-man football state championship run, which has never happened in program history. CDSR punched a ticket to the playoffs earlier in the month and in previous seasons have never made it past the second round of the section playoffs.

They have their legion of fans, just like any other team, from their school. In case you were wondering, no they can’t hear them… but they say they can definitely feel them, and their support.

Over the course of their magical runs, CDSR not only got the job done on the football field, but the Cubs also showed some flair and personality to go along with the wins. Prior to the Cubs’ Nov. 5 win over Santa Clarita Christian, CDSR’s football team shared a TikTok hype video rallying the community in ASL.

CDSR’s impressive run this season has prompted State Superintendent of Public Instruction Tony Thurmond to give the Cubs a shoutout.

"These players and students have been working hard on and off the field," Thurmond said in a Nov. 10 press release. "This program is a model of how public education can change lives and sustain students." 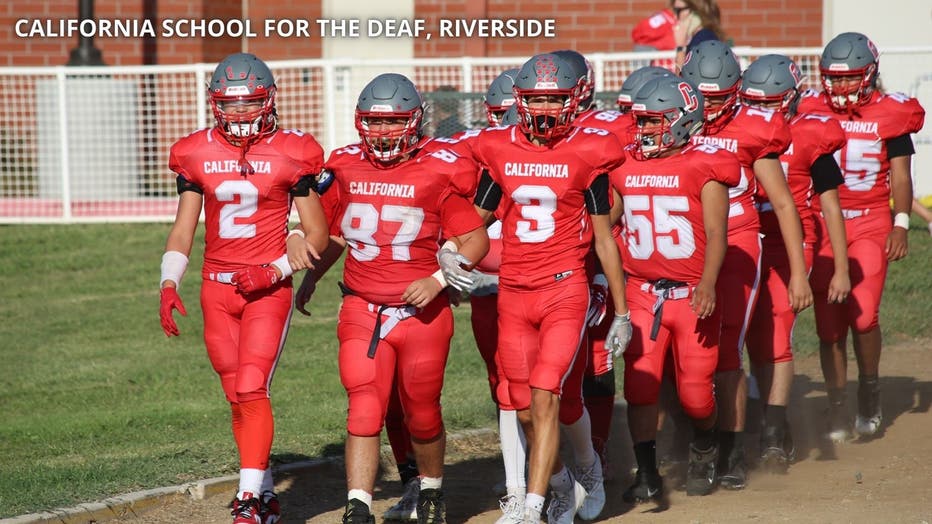 "As a former student-athlete, I understand the lasting positive impact of our sports programs on our students and the valuable friendships that are made on the field. I am proud of the CDSR football team’s winning record during this breakthrough season and wish them luck in the playoffs," Thurmond adds in the Nov. 10 press release.

Prior to securing a playoff spot, the Cubs won their first Victory League title in 16 years after blowing out San Jacinto Valley Academy 60-15 in late October.

CDSR will hit the road next round to face Avalon on Friday, November 19. Fans interested in catching the action can click here for more information on purchasing tickets.

The Fremont campus made history in the state by being the first special education program in California in 1860.

As of November 2021, CDSR is continuing its push to bring in more bleachers to the stands. Those interested in helping the school can write a check to the CDSR Athletics Trust Fund with the memo, "bleachers" and send to California School for the Deaf Riverside, Athletics Department: Laura Edwards, 3044 Horace Street Riverside, CA, 92506.

There is also a Cash App account that fans can send money directly to the school under $CDSRAthletics, with the memo "bleachers."

CDSR's magical run into the postseason isn't the first time football players from the deaf and hard of hearing community made an impact on the sport. Without Gallaudet University – a private school in Washington, D.C. – there wouldn't be a team huddle before each play.

According to the university, the Bisons was playing another deaf football team in 1894. Gallaudet's quarterback Paul Hubbard was worried the opposing team would see the Bison's ASL before each play so the team formed a tight circle to communicate in private.

Now, football teams across all levels are huddling before most plays. In addition to football, other sports have also adopted their version of the huddle, such as basketball teams during a timeout, baseball teams during mound visits and soccer teams gathering before kickoff.