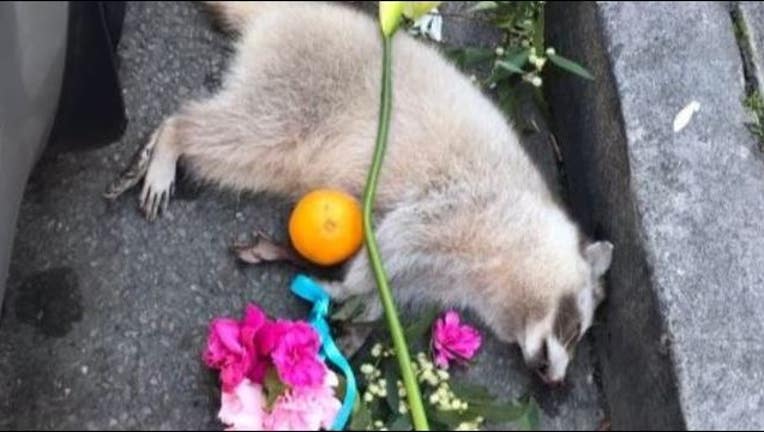 Oakland resident Pawel Dlugosz posted a photo March 17, 2019 of a raccoon that appears to be dead in the Adams Point neighborhood near Lake Merritt with an orange and flowers laid over its body and at its side.

OAKLAND, Calif. (AP/KTVU) - Social media users in California were posting memorial messages in honor of what is believed to be a dead albino raccoon, prompting questions about the use of poison around a popular lake in Oakland.

The San Francisco Chronicle first reported that Oakland residents were posting messages mourning the passing of the nocturnal animal on the Next Door social networking app.

Pawel Dlugosz took one of the original photos of the raccoon, dead in the street, in Adams Point neighborhood near Lake Merritt. An orange and flowers were placed near the raccoon's body. Dlugosz says he believed the raccoon died on Thursday, and it was still there, dead, in front of the Resurrection Lutheran Church on Euclid Avenue on Monday. He said he filed a ticket to have city crews pick it up.

"It's not every day you see a trash panda," he told KTVU.

Users on Reddit also posted about the raccoon and there were debates on both platforms whether it was Oakland's last albino raccoon.

The death also prompted an unconfirmed discussion on whether someone was leaving poison at the park.

One user wrote: "There is a group of well-known albino or "orange" raccoons that live around lake Merritt. A few have died recently because someone was spreading animal poison around the park to kill them. I saw this one today, someone laid out flowers for it." The user added that he or she found out because a park ranger warned a bunch of people while they were walking their dogs not to let their animals eat anything.

Daniel Wilson, spokesman for the Alameda County Venctor Control District on Monday, told KTVU that he received a 311 tip on March 8 that someone had seen pellets of rat poison left at Lake Merritt, which is illegal. He referred the matter to the county's agricultural sector and went to check it out himself. He said he didn't see anything there the next day.

Sometimes, he said, the county places rodenticide six inches deep into the ground if there is a rodent problem, but that simply putting poison out on street level is not safe, legal or effective and something that vector control does not do.

"Leaving rat poison out at Lake Merritt, the jewel of Oakland, is simply crazy," he said. "No one should do it."