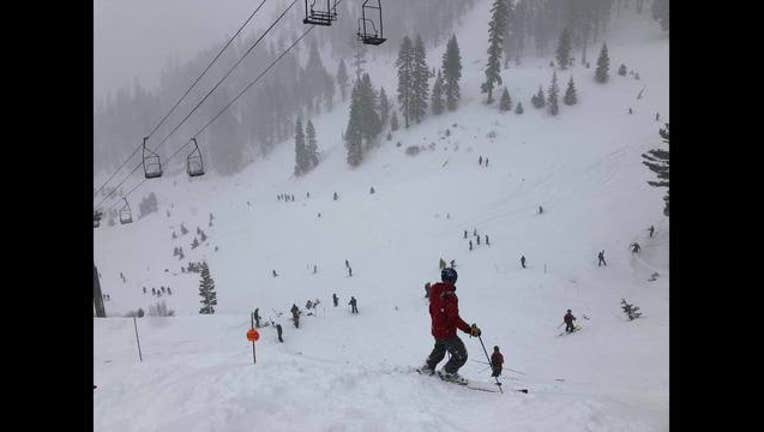 LOS ANGELES (AP) -- A winter storm that roared through California left a snowboarder dead and sent an avalanche crashing down on five people Friday at a Sierra Nevada ski resort, but the danger of another deadly mudslide eased in a devastated coastal community.

Dozens of rescuers and rescue dogs rushed to the scene after an avalanche hit the Squaw Valley Ski Resort near Lake Tahoe near the Nevada state line. Video showed them digging out a man from the snow.

One man was hospitalized with a serious lower body injury, another person was treated for injuries and released while three other people escaped injury, the resort said in a statement.

Heather Turping was snowboarding with her boyfriend when she heard someone scream "Avalanche!" and saw "a cloud of snow coming down."

"It was massive," she said. "It just happened to literally pass a foot in front of me."

A woman screamed that her husband was missing and someone spotted a snowboard poking out of the snow.

"I took my gloves off and I helped dig him out," she said. "When he got uncovered, a ski patroller said, `You were under for six minutes."'

The man wasn't seriously hurt and was able to snowboard back down the mountain, she said.

The skiers and snowboarders were within areas open to skiing at the time and the guests had been warned of the potential danger, resort spokeswoman Liesl Hepburn said.

The resort used explosives and other tools to knock down snow to prevent avalanches throughout the day but the snowfall was heavy, she said.

"We had assessed the area to be safe to open to the public and unfortunately an avalanche did occur after that assessment was made," she said.

The avalanche occurred hours after the body of a missing snowboarder was found at the same resort.

Wenyu Zhang, 42, vanished Thursday as the region was hit by a blizzard packing winds gusting to nearly 150 mph (241 kph) over the ridge tops. It dumped 3 feet (1 meter) of snow in the mountains.

A blizzard warning expired Friday but whiteout conditions were still possible around Lake Tahoe, where a winter storm warning remained in effect until 10 a.m. Saturday, the National Weather Service said.

About 300 miles (482 kilometers) south, rain fell in the coastal foothill communities of Santa Barbara County, where thousands of people had been told to flee out of concern that the approaching storm might send huge swathes of fire-scarred slopes rushing down on them.

But the rain that moved through Southern California Thursday night and Friday spared Montecito, which saw hundreds of homes destroyed in January mudslides. Twenty-one people were killed then and two remain missing.

Evacuation orders affecting up to 30,000 people on the south Santa Barbara County coast were lifted at midmorning.

"The worst of the storm has passed and we are cautiously optimistic that due to a significant amount of pre-storm preparation we have come through this with minimal impact," said Rob Lewin, director of the county Office of Emergency management.

Some minor roadway flooding occurred, but the region's main highway, U.S. 101, remained open throughout the storm.

Officials said 87 percent of those in the threatened areas complied with the evacuation order.