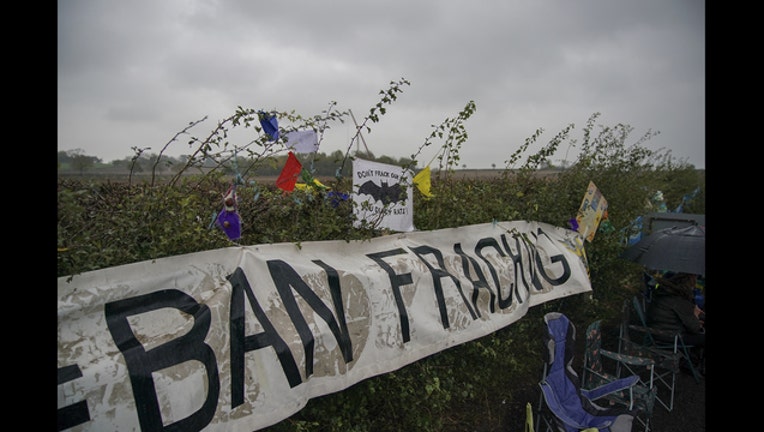 PICKERING, ENGLAND - OCTOBER 19: Anti fracking banners surround the KM8 drilling site which is owned by fracking company Third Energy, near the village of Kirby Misperton, on October 19, 2017 in Pickering, England. The company were granted planning p

SACRAMENTO, Calif. (AP) - California's attorney general sued the Trump administration Wednesday for rolling back a fracking rule that the state says is designed to protect public health and the environment.

The suit filed by Democratic Attorney General Xavier Becerra challenges the federal Bureau of Land Management's rollback of the rule that requires drilling companies to disclose what chemicals they've used for fracking.

The rule was adopted in 2015 under the administration of Democratic President Barack Obama regarding the process known as fracking, which cracks open underground oil and gas deposits with pressurized water, sand and chemicals.

BLM spokeswoman Megan Crandall said the bureau does not comment on current or pending litigation.

Becerra said the Trump administration broke the law by not following required procedures including getting public comment. He said the rollback also contradicts federal environmental laws and was arbitrary and capricious.

"They didn't let the law or the facts get in their way in their zeal to repeal what was a commonsense measure," Becerra said.

The rule was put on hold in 2016 by a Wyoming judge who said the BLM had no authority to set such a rule. That decision was appealed to the 10th Circuit Court of Appeals in Denver, where the administration asked the judges to delay a decision because it intended to roll back the rule.

Becerra announced the lawsuit as the former congressman marked his first year as California's top law enforcement official. He was appointed to replace Kamala Harris when she was elected to the U.S. Senate and is running for re-election this year against several challengers.

Becerra said his office has filed 25 lawsuits against President Donald Trump's administration. Courts have ruled in Becerra's favor in a number of the cases -- some of which were filed in collaboration with other states.

Becerra said the state's innovations and technology achievements have helped make it the world's sixth largest economy and are "worth fighting for."

The administration is appealing that ruling to the San Francisco-based 9th U.S. Circuit Court of Appeals and said it would seek a U.S. Supreme Court review even before an appeals court issues a decision.

Becerra also has defended the Affordable Care Act and a woman's right to get birth control as well as gays and lesbians who wish to serve in the military.