SAN FRANCISCO - A $13.5 billion settlement between victims of California's catastrophic wildfires and the utility blamed for causing them was supposed to bring some peace and hope to people still reeling from the devastation.

Instead, the deal has sparked confusion, resentment, suspicion and despair as the victims, government agencies and lawyers grapple for their piece of the pie.

More than 81,000 have filed claims to the settlement fund, setting the stage for a potential scrum as Pacific Gas & Electric scrambles to emerge from one of the most complex bankruptcy cases in U.S. history by June 30.

“How is it in any way fair that the actual victims of this fire, or any of the fires, are put at the very, very bottom of the priority list,” Michelle Barker, 54, wrote in a recent letter to the bankruptcy judge overseeing the settlement. 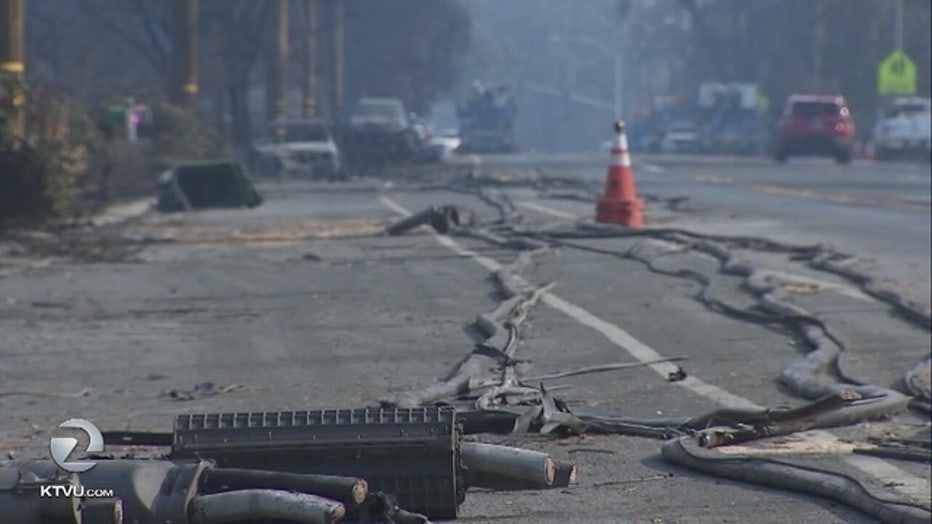 Barker lost her home to the 2018 fire that nearly wiped out the town of Paradise.

Some of the tensions surfaced during a Wednesday hearing focused on whether federal and state agencies are entitled to tap the fund to recoup any of the roughly $4 billion they doled out after the wildfires. Health chain Adventist Health also is seeking at least $1 billion for losses from its heavily damaged hospital in Paradise, and lawyers could try to take up to a third.

Victims also are upset that half the settlement, or $6.75 billion, would be paid in stock from PG&E, the company responsible for ruining their lives.

The stock payment may prove a clever strategy, said San Francisco bankruptcy attorney Michael Sweet, because that could make it more difficult for California Gov. Gavin Newsom to follow through on threats of a government-backed takeover if PG&E doesn't make reforms.

A government takeover would likely cause the company's stock to drop, further diminishing the value of the victims’ settlement. 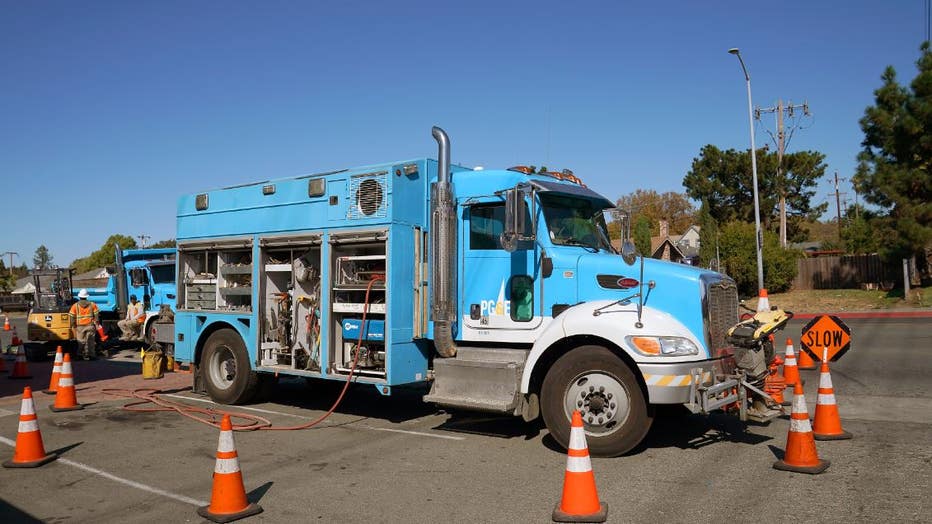 Pacific Gas & Electric crews work on October 09, 2019 in Vallejo, California. PG&E plans on cutting power to hundreds of thousands of customers across central and northern California as a precaution against starting wildfires as low humidity (Photo by Thearon W. Henderson/Getty Images)

“They are turning the victims into human shields,” Sweet said. “You only go into bankruptcy because there isn’t enough to go around for everyone.”

In Wednesday's hearing, attorneys for the victims, PG&E, the Federal Emergency Management Agency and the California Governor's Office of Emergency Services spent more than two hours debating whether disaster-relief agencies should be able to draw on the victims' fund to cover the billions that they gave to help during and after the deadly wildfires.

The government agencies say taxpayers deserve to be reimbursed for footing the bill because years of willful neglect by PG&E resulted in dangerous power lines that ignited the wildfires. PG&E and the victims' attorneys contend the law doesn't allow them to make claims because the utility didn't intentionally cause the fires.

U.S. Bankruptcy Judge Dennis Montali didn't rule on the issue Wednesday but signaled he will soon. 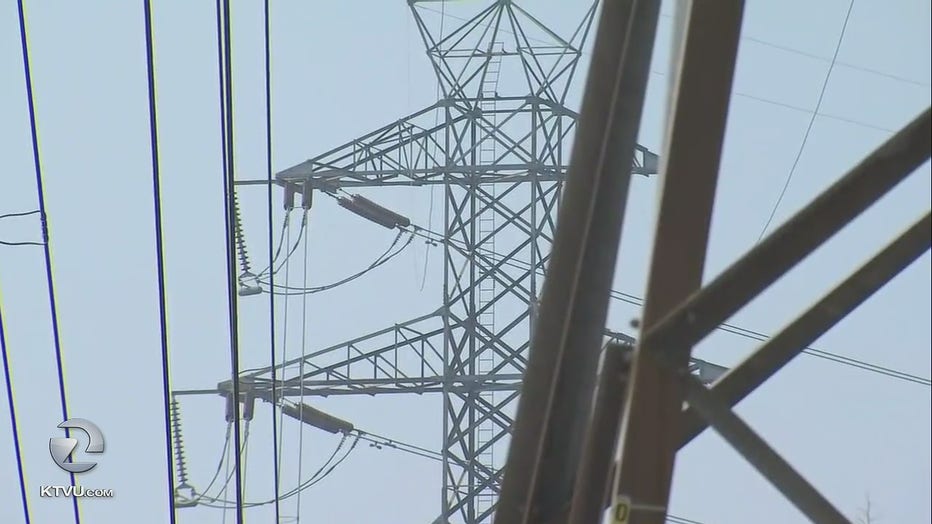 The Kincade Fire ignited four minutes after a malfunction on a PG&E transmission tower.

Dozens are making passionate pleas to Montali asking him to rework a deal he approved in December. More than 1,600 wildfire victims signed an online petition calling the settlement unfair.

PG&E “is building off of our losses in a sense,” said Jason Meek, 48, whose Northern California wine country home was destroyed in 2017. “It’s important in my view that this settlement is done with thought and care.”

The possibility of government agencies tapping the fund has outraged people still looking for places to live after losing their homes and, in some cases, still grieving loved ones who perished during the worst wildfires in modern U.S. history.

Montali, who also presided over PG&E’s previous bankruptcy from 2001 to 2004, has never left any doubt that compensating the wildfire victims is his top priority in the new case, which began in January 2019. Claimants have since filed more than $50 billion in wildfire claims, which the utility has proposed settling for a total of $25.5 billion, which includes reimbursement for insurers and other things. 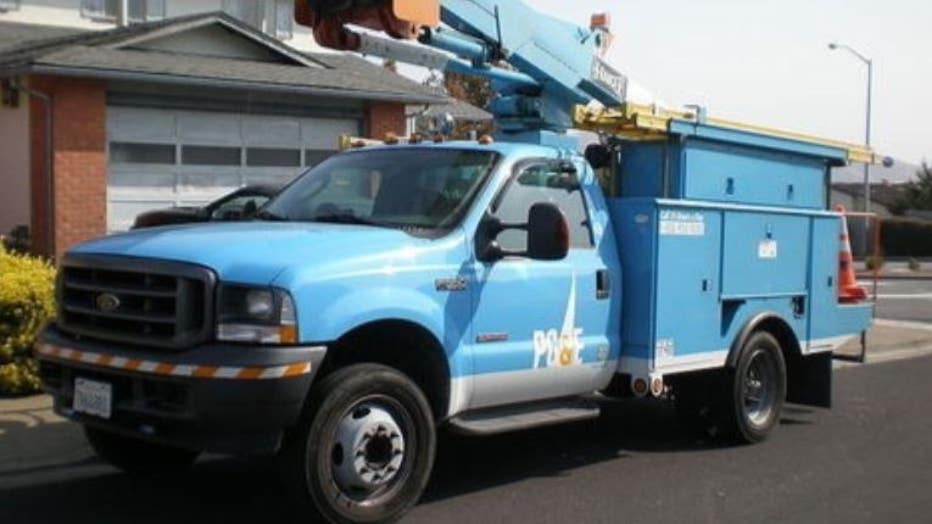 Attorneys representing the victims concede the settlement isn’t perfect, but they say it's the best deal possible under the circumstances.

PG&E believes the misgivings about the settlement are being expressed by a vocal minority. In a Wednesday statement, the company reiterated it's belief that the deal “brings us one significant step closer to getting victims paid so they can rebuild their lives."

Still, there is a growing sentiment among victims that they're getting such a raw deal that they should reject it, even if that means waiting longer to be paid.

“I want you to know that many of us understand what is happening and that we will move heaven and earth to stop it,” Lisa Williams, another survivor of the 2018 fire in Paradise that killed 85 people, vowed in a Feb. 6 letter.

Compounding frustration over the plan to pay them in stock, PG&E agreed to an all-cash settlement of $11 billion to reimburse about 110 insurers for losses paid out to policyholders.

“Not only do we have to wait to get paid but we’d have to depend on the company’s recovery,” said Meek, who said he has moved many times since losing his house, and is nowhere close to rebuilding on his property. “If a fire comes again, what will happen to the stock price?”

The last time PG&E emerged from bankruptcy in April 2004, its stock more than doubled while paying out billions of dollars in dividends. PG&E’s stock has sunk as low as $3.55 four months ago, but has since rebounded to $16 to $18 per share, largely on hopes the company will be able to deliver on its projection of record profits as it bounces back from bankruptcy. 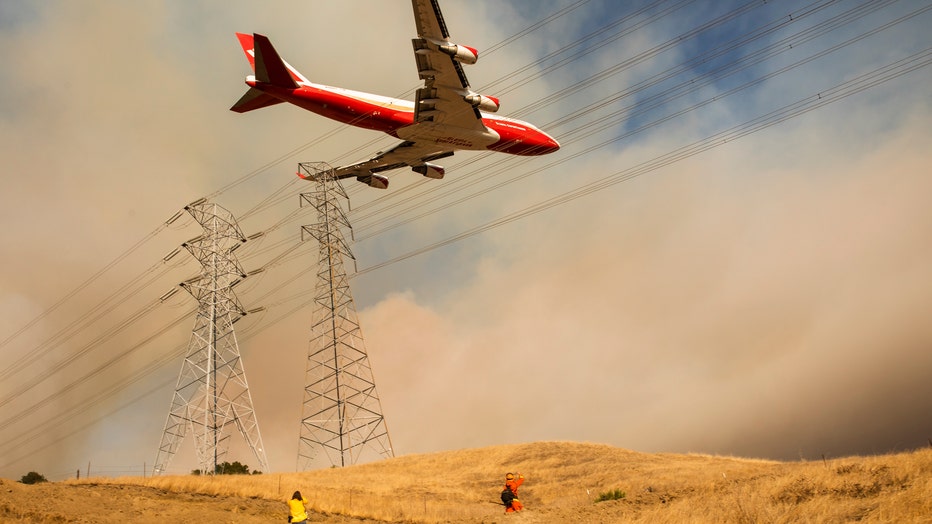 An air tanker flies over PG&E power lines en route to drop fire retardant in the valley below during the firefighting operations to battle the Kincade Fire in Healdsburg, California on October 26, 2019. - US officials on October 26 ordered about

Court documents say none of the victims will have to accept PG&E stock if they don’t want it but the process for choosing an alternative hasn't been spelled out yet.

Sarah Bates, a 67-year-old former nurse who moved to Virginia after losing her Paradise home in 2018, said those affected the most are being “tossed aside."

“I don’t have a lot of faith that I’m going to see any significant compensation at the end of it all," Bates said.