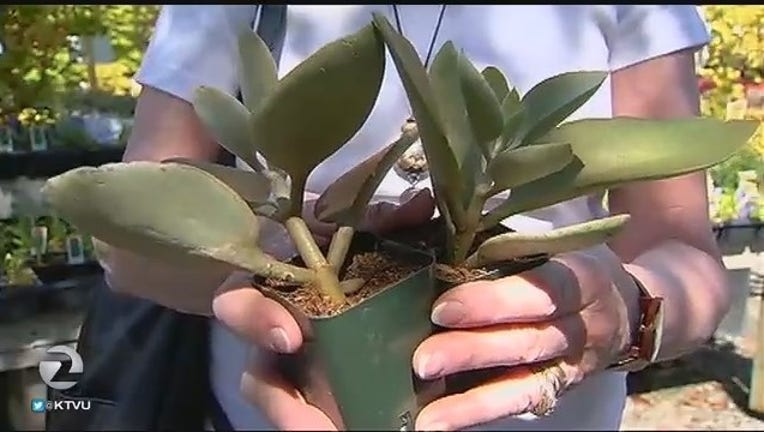 ORINDA, Calif. (KTVU) - This week the Governor ordered historic cutbacks and mandatory water restrictions for the entire state, and that leaves a lot of questions for people looking to garden this spring.

At the McDonnell Nursery in Orinda, and at gardening centers pretty much everywhere else, Easter weekend is a time of year people really get into spring gardening. "They're coming in, they're saying, 'I love my garden. I still want to be able to do something. What can I do?'" said Sara McDonnell of the McDonnell Nursery.

At the nursery, experts first assess the customer's current use, "We find that a lot of people are over watering generally. You can get by with two to three times a week, generally speaking, on most plants. You water for longer periods of time but not every day. You want that water to get deeper. You use drip emitters," said McDonnell.

New plants should be drought tolerant: things such as perennials and shrubs. "They're ones that don't take a lot of water on a regular basis," said McDonnell.

The great thing about California native plants and other imported drought resisters is that they've had millennia to figure out their drought resistant strategies, so you don't have to. But, it goes father. "Succulent gardens. People are coming to that a lot for the lowest use of water," recommends McDonnell.

"You can let them dry out in between waterings and they are easy care," said Audrey Gronau, a customer who wholeheartedly agrees.

One easy option is using mulches on, or around everything you can. "It really reduces the amount of water loss from the soil. It adds beauty to your yard and keeps weeds down as well, but it really helps the water retention," said McDonnell.

But there are no guarantees. "I live out in Concord and it's really hot, and even though, moderate to low water plants really need more water than we ever thought they really would," said customer Carla Lundstrom.

Eastbay MUD, the East Bay Municipal Utilities District, offers this assessment: "This is going to be a very hard, long summer. Your established trees and shrubs - they can probably withstand this drought and just two times a week watering restrictions. Those newer plants probably aren't going to make it, so it's not a good year to be planting new things, and that grass is probably not going to be a green this year," said Abby Figueroa, spokeswoman for Eastbay MUD.

"I'm looking at my front lawn and deciding how much of it I'm going to let go," laments nursery customer Carla Lundstrom.

During the drought, and probably beyond there are five big goals: conserve, divert, capture, de-lawn and evolve.

Conserving means to learn to live using less water, especially outdoors. "I think because of global warming and our Earth is getting warmer, We have to change our thoughts about lawns and about flowers and the use of our water," said Audrey Gronau, a customer of McDonnell Nursery.

Divert means sending used, or so-called gray water from your shower, bathroom sink and washing machine, out to your lawn and garden.

A washing machine-only system does not require a building permit and runs about $2,500, while sink and shower systems require permits and more money. "It might be hard for me and most. It's not inexpensive to do some of these things," said Lundstrom.

It's also advisable to capture as much water as possible when it rains. Consider installing in a rain catchment system before the next rainy season. Small systems can be installed permit free, for $1,800 to $2,500, but bigger systems require permits and more money.

"A friend of ours has a huge piece of property, has a humongous tank that catches all rainwater, uses no new water to water her plants and garden," said Lundstrom.

As for the option to de-lawn - the state is considering financial incentives for folks to remove part of, or all of their lawns. While the state considers helping people financially to take their old turf out, it's highly unlikely that they'll consider anything about helping them put artificial turf in.

Northern California must and can evolve. "Once people are learning that there are other options and that there's still things they can do and the plants can still look good and they can still have a beautiful yard, they're becoming more open to that," says McDonnell. "I think it would take a while, yes, but I wouldn't mind it. I like the look.

As the population continues to skyrocket, the California "desert lawn look" could become a trendy way to live. For many Californians, brown will now be the new green.