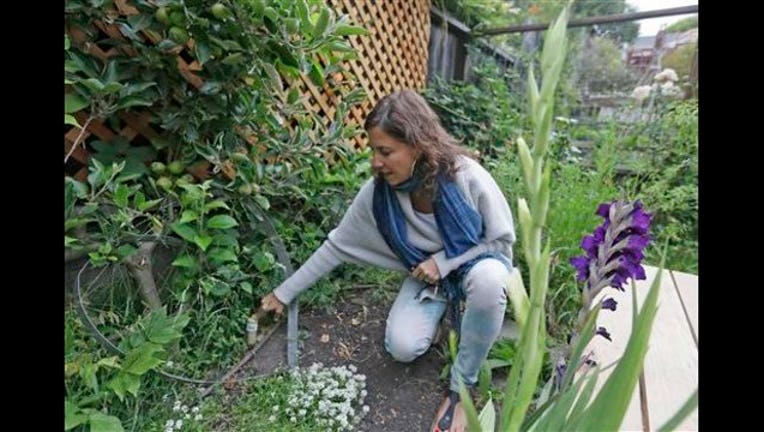 California, like many states, long required all water used in homes to be piped out with the sewage, fearing health risks if water recycling is done clumsily.

Since 2010, however, the increasingly dry state has come around, and now even encourages the reuse of so-called gray water, which typically includes the gently-used runoff from bathroom sinks, showers, bathtubs and washing machines.

And California's building codes are catching up as well, allowing owners of existing homes to create the simplest systems for the safest gray water without a permit.

So while others think about hauling buckets to catch stray drips from their sinks and tubs, Negrin and Friedman can relax: Each gallon they use in the shower means another for the butterflies that duck and bob over their vegetable garden, for the lemon tree shading the yard, and for two strutting backyard chickens busily investigating it all.

"I love a lush garden, and so it seems like why not, right? I could have a lush garden if it doesn't go into the sewer system," Negrin said. "So, yes, "I'm going to take a shower."

Because pathogens swimming in untreated gray water can transmit disease if humans ingest them, most modern health and building codes have long made recycling it impractical. Many families did it anyway, without official oversight or permits. Greywater Action, a group that promotes household water recycling and trains families and installers on the do's and don'ts, estimates that more than a million Californians had illegal systems before plumbing codes were updated.

But interest in doing it the right way has soared since April 1, when Gov. Jerry Brown ordered a 25-percent cut in water use by cities and towns. Palo Alto gray-water system installer Sassan Golafshan saw his website crash within a day from the surge in traffic.

"There's huge interest," said Laura Allen, a co-founder of Greywater Action. Contractors "told us they're getting so many more calls than before."

Water savings could be significant. A 2009 study by the University of California at Los Angeles found that if everyone in the southern part of the state recycled the water that currently goes down drains from their showers and washing machines, there would be enough to satisfy Southern California's entire outdoor residential water use needs.

At the California Water Resources Board's recycled water unit, chief Randy Barnard is fielding many calls from homeowners desperate to save their beloved lawns and gardens. "If they've got a prize fruit tree they've been babying for years, they don't want to lose that tree," he said.

But for many, he has some bad news to share. Recycling water at home is not as easy as just hooking your shower up to the lawn sprinklers, and recycled water probably won't save the lawn.

Water from toilets is considered "black" water and sent straight to wastewater treatment plants. Many states also bar water from kitchen sinks, since homeowners may have contaminated it by washing raw meat.

In California, homeowners are now allowed to irrigate with untreated water straight from bathroom sinks, washing machines and bathtubs, as long as — among other requirements — the water lines run beneath soil or mulch, so as not to come in contact with people. That rules out using untreated gray water on lawns, which typically need above-ground spray heads or sprinklers.

Gray water can even go to vegetable gardens like Negrin's and Friedman's, as long as it doesn't touch root vegetables or any other plant part that's eaten. Tomatoes are fine, but forget about carrots.

The latest plumbing-code changes have enabled families to install these straightforward laundry-to-landscape systems without a permit, sending wash water into the yard with a valve to divert it back into the sewage system when needed. A handy homeowner can do it with no more than a couple hundred of dollars of piping and parts.

About 20 states now allow gray-water recycling, and around the country, Arizona has some of the friendliest laws. California still has more to do, Allen and other advocates say. Raymer, at the building trade group, hopes for more legal changes in the coming years to align state gray-water codes with the rules of hundreds of cities and towns.