Police are still searching for the suspects in a mass shooting at a Halloween party in Orinda that left five people dead.

ORINDA, Calif. - Orinda police call logs from the night of the Orinda Halloween-party shooting that left five people dead shows the chaos and terror that occured following the gunfire and further details why the city's only two patrol officers were held up in Oakland on a stolen car case.

On Halloween night, a woman who had paid $1,150 to rent an Airbnb at 144 Lucille Way, a sprawling home owned by Michael Wang and Wenlin Luo, advertised an "Airbnb Mansion Party" and about 100 people showed up. The woman who rented the home had told the homeowners she needed a place to stay to escape the smoke from the Kincade Fire in Sonoma County, authorities said. Instead, she organized a party that asked guests to "bring your own booze" and "bring your own weed."

Some of the guests leaving the deadly Halloween party in Orinda. One neighbor said he saw about 30-50 people leaving, many of them trying to leave in Ubers. Oct. 31, 2019

Here is a breakdown of what happened the night that five young people were shot and killed at the party, according to police logs released Tuesday to KTVU following a California Public Records Request. The logs do not reveal any new significant details that hadn't already been reported. However they do give the first detailed, chronological look at what transpired on Oct. 31.

There have been no arrests in either the Orinda or Lafayette case, the sheriff's office said Wednesday. A witness at the party described one of the suspects as a "heavyset" man wearing an orange-hooded jacket and was possibly carrying a military MAC-10 "machine-operated" pistol.

The logs show that Orinda had no police officers patrolling its streets for at least two hours that night beginning at 8:48 p.m. until 11:01 p.m., about 10 minutes after the deadly shooting occurred.

Orinda Police Chief David Cook said at a City Council meeting earlier this month that two officers on duty at any given time is the standard in the city of 19,000 people. But, some Orinda residents and city leaders are now calling for additional staffing.

Meanwhile, city records, also obtained by KTVU, show that Orinda code enforcement officers were aware of the Lucille Way Airbnb property, which rented out for $800 a night and charged a $350 cleaning fee. Planning director Drummond Buckley wrote homeowners March 8, letting them know they'd be getting two "notices of violation" for a large party in the summer of 2018.

Code enforcement officers got involved after neighbors complained about overflowing garbage and a dead raccoon on the rental property. Buckley told the homeowners that they needed to re-list their property on Airbnb from "up to 30 people" allowed to no more than 13 people onsite at any time. If there were any more violations, Buckley wrote them, there would be fines.

The City Council has already issued a temporary moratorium on "no host" short-term rentals in Orinda following the deadly shooting. The council will revisit the issue again at a future meeting to determine a longer term solution. 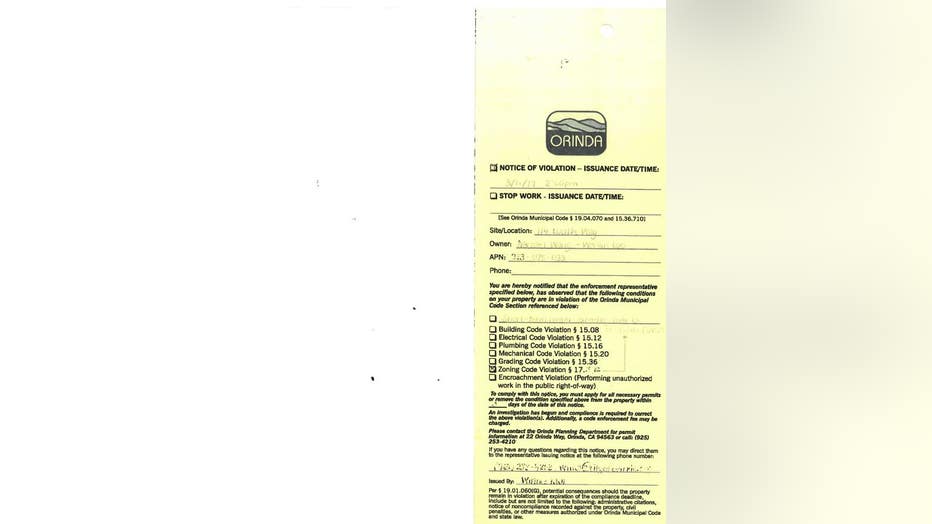 City records show Orinda code enforcement officers were well aware of the Lucille Way property, which rented out for $800 a night. The homeowners received 2 "notices of violation" about a previous party held in July.