For the first time ever, the Supreme Court heard arguments via phone on May 4.

WASHINGTON (AP) - They politely took turns speaking. Not a child, spouse or dog could be heard in the background. The conference call went long, but not by that much.

And with that, the Supreme Court made history Monday, hearing arguments by telephone and allowing the world to listen in live, both for the first time.

The arguments were essentially a high-profile phone discussion with the nine justices and two arguing lawyers. The session went remarkably smoothly, notable for a high court that prizes tradition and only reluctantly changes the way it operates.

The high court had initially postponed arguments in 20 cases scheduled for March and April because of the coronavirus pandemic. Courtroom sessions were seen as unsafe, especially with six justices aged 65 or older and at risk of getting seriously sick from the virus. But the justices ultimately decided to hear 10 cases by phone over six days this month.

The cases the court will hear include President Donald Trump’s effort to shield tax and other financial records and whether presidential electors have to cast their Electoral College ballots for the candidate who wins the popular vote in their state.

The court chose a somewhat obscure case about whether the travel website Booking.com can trademark its name for its first foray into remote arguments. The more high-profile arguments come next week.

“Oyez! Oyez! Oyez!” Talkin began, using the ceremonial language used in the courtroom. But she skipped a few words of her usual script and didn't tell people “to draw near” and give their attention, a reflection of the unusual circumstances.

RELATED: US to rein in flood of virus blood tests after lax oversight

Roberts asked the first questions of government attorney Erica Ross, who was arguing that Booking.com should not be allowed to trademark its name because it is a generic term followed by “.com.” The justices then asked questions in order of seniority instead of the usual free-for-all, rapid-fire style that questions are asked in the courtroom. That meant Justice Brett Kavanaugh, who joined the court in 2018, went last.

One mild surprise came early in the arguments when Roberts passed the questioning to Justice Clarence Thomas, who once went 10 years between questions and has said he thinks his colleagues pepper lawyers with too many. But in this format, Thomas spoke up, asking questions of both lawyers. It was the first time in more than a year that he had asked a question.

Glitches were minor. At one point Justice Stephen Breyer’s line was briefly garbled. At another, when the questioning was passed to Justice Sonia Sotomayor, there was a long pause and the chief justice said her name a second time before her voice was heard. “I’m sorry, chief,” she said before beginning her questioning.

Several justices said “good morning” to the lawyers, a telephone nicety not often heard in the courtroom. And Roberts occasionally interjected to keep things moving, saying, “Thank you, counsel,” when he wanted Ross or Booking.com’s lawyer Lisa Blatt to stop talking so he could move to the next justice.

“It is a fundamental principle of trademark law that no party can obtain a trademark for a generic term like ‘wine,’ 'cotton,’ or ‘grain,’” Ross told the justices, pointing them to an 1888 Supreme Court case in which the justices ruled that adding a word like ”Company” or “Inc.” to a generic term doesn’t make it eligible to be trademarked. 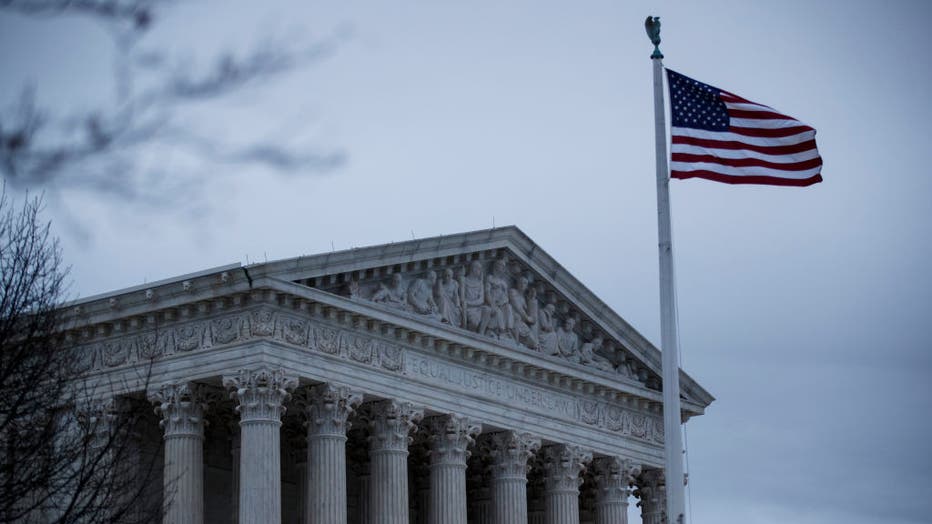 Photo taken on March 12, 2020 shows the U.S. Supreme Court in Washington D.C., the United States. Several landmarks in Washington D.C., including the White House, are closed to the public over an ongoing COVID-19 outbreak in the nation. (Photo by Tin

Some of the exchanges were playful, as happens from time to time in the courtroom. Breyer used pizza.com and cookies.com as examples of websites and discussed with Blatt searching on the internet for toilet paper.

All told, arguments took roughly an hour and 15 minutes, slightly longer than the hour allotted in the courtroom.

One element of the morning that was truly different was the audience. While the courtroom holds only about 500 people and members of the public who want a seat have to line up outside the Supreme Court before dawn, an untold number of people anywhere in the world could listen to Monday’s arguments, which were streamed to the public by the media.

The experiment could propel the court to routinely livestream its arguments. Or it could just be an extraordinary exception to the court’s sustained opposition to broadening the audience that can hear, if not see, its work live.