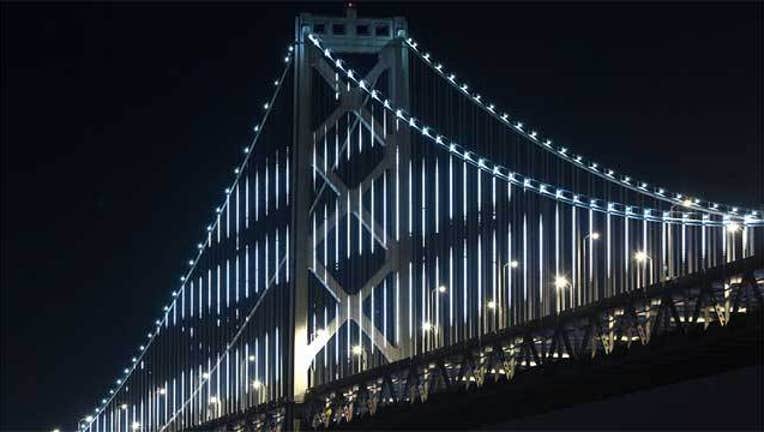 SAN FRANCISCO (KTVU and wires) -- The 1.8-mile-wide LED light sculpture that has made the Bay Bridge twinkle for the past two years will temporarily go dark for 11 months starting Friday.

Farewell celebrations have been organized for shortly after sunset this evening and then again shortly before sunrise on Friday, according to Illuminate the Arts, the non-profit organizer of The Bay Lights art installation.

The 500-foot-high art installation, which displays 25,000 LED lights and was designed by artist Leo Villareal, will be removed from where it sits on the western span of the Bay Bridge to allow Caltrans crews to perform maintenance on the bridge cables.

Villareal said in a statement on the Illuminate the Arts website that he is humbled by the support the community has shown for the project and the desire expressed by the public to keep it intact.

"There is no higher compliment you can pay a work of art than wanting to spend time with it," Villareal said.

A farewell celebration is being hosted at 7:30 p.m. today below the lights at the patio behind Waterbar, a restaurant located at 399 The Embarcadero in San Francisco. The first 1,000 attendees will receive a free LED tea light, gifted by Illuminate the Arts in appreciation of public support for the project.

Villareal and Illuminate the Arts founder Ben Davis will speak at 8 p.m.

The final celebration will begin at 6:45 a.m. Friday, during the last hour of The Bay Lights' illumination.

The Sunrise String Quartet, comprised of members of the San Francisco Symphony, will perform for the last hour of The Bay Lights illumination. Illuminate the Arts will provide complimentary coffee and pastries on the patio behind EPIC Roasthouse at 369 The Embarcadero.

The artwork will be reinstalled on the bridge in time for Super Bowl 50, which will be played at Levi's Stadium in Santa Clara on Feb. 7, 2016.