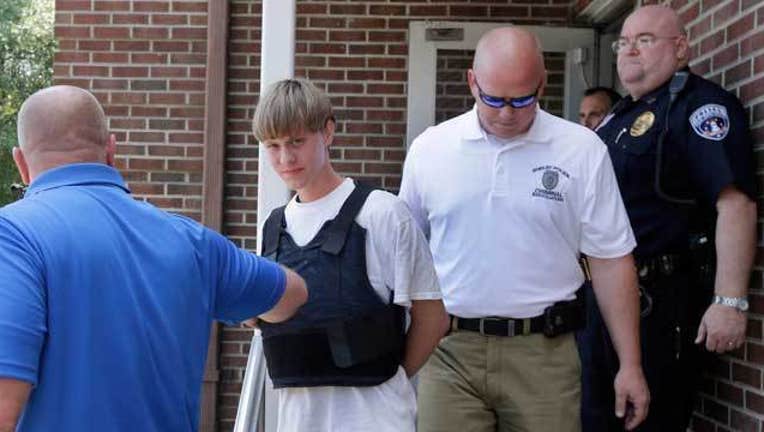 CHARLESTON, S.C. (AP) — The suspect in the mass slayings of churchgoers in Charleston was charged Friday with nine counts of murder and could face the death penalty, authorities said.

Police spokesman Charles Francis said Friday that 21-one-year-old Dylann Roof is charged with the 10 total counts -- 9 counts of murder and a weapon charge -- in the Wednesday night fatal church shooting.

The weapon charge against Roof is possession of a firearm during the commission of a violent crime. Under South Carolina law, it's illegal to use a weapon such as a knife or gun to commit a violent crime whether or not the weapons is legally owned.

A bond hearing for Roof is scheduled for 2 p.m. Friday.

Roof, 21, is charged with fatally shooting nine people during a Bible study at The Emanuel African Methodist Episcopal Church in Charleston on Wednesday night, ripping out a piece of South Carolina's civic heart and adding to the ever-growing list of America's racial casualties.

Police captured Roof in Shelby, North Carolina, after a motorist spotted him at a traffic light on her way to work. His apprehension ended an intense, hours-long manhunt.

Roof waived extradition and was back in Charleston on Thursday night, authorities said, with a bond hearing pending. On Friday, South Carolina Gov. Nikki Haley told NBC's "Today" show the shooter should get the death penalty.

"We will absolutely will want him to have the death penalty," Haley said.

Charleston officials announced a prayer vigil for Friday evening. The city's mayor described the shooting at the church as an act of "pure, pure concentrated evil."

The victims included a state senator who doubled as the church's minister, three other pastors, a regional library manager, a high school coach and speech therapist, a government administrator, a college enrollment counselor and a recent college graduate — six women and three men who felt called to open their church to all.

President Barack Obama called the tragedy yet another example of damage wreaked in America by guns.

NAACP President and CEO Cornell William Brooks said "there is no greater coward than a criminal who enters a house of God and slaughters innocent people." Others bemoaned the loss to a church that has served as a bastion of black power for 200 years, despite efforts by white supremacists to wipe it out.

"Of all cities, in Charleston, to have a horrible hateful person go into the church and kill people there to pray and worship with each other is something that is beyond any comprehension and is not explained," said Mayor Joseph P. Riley Jr. "We are going to put our arms around that church and that church family."

"The suspect entered the group and was accepted by them, as they believed that he wanted to join them in this Bible study," she said. Then, "he became very aggressive and violent."

Meek called the FBI after recognizing Roof in the surveillance footage, down to the stained sweatshirt he wore while playing Xbox videogames in Meek's home the morning of the attack.

"I didn't THINK it was him. I KNEW it was him," Meek told The Associated Press after being interviewed by investigators.

Meek said during their reunion a few weeks ago, Roof told him that he had used birthday money from his parents to buy a .45-caliber Glock pistol and that he had "a plan." He didn't say what the plan was, but Meek said it scared him enough that he took the gun out of Roof's car and hid it in his house until the next day.

It's not clear whether Roof had any connection to the 16 white supremacist organizations operating in South Carolina, but he appears to be a "disaffected white supremacist," based on his Facebook page, said Richard Cohen, president of Southern Poverty Law Center in Montgomery, Alabama.

On his Facebook page, Roof displayed the flags of defeated white-ruled regimes, posing with a Confederate flags plate on his car and wearing a jacket with stitched-on flag patches from apartheid-era South Africa and Rhodesia, which is now black-led Zimbabwe.

Spilling blood inside a black church — especially "Mother Emanuel," founded in 1816 — evoked painful memories nationwide, a reminder that black churches so often have been the targets of racist violence.

A church founder, Denmark Vesey, was hanged after trying to organize a slave revolt in 1822, and white landowners burned the church in revenge, leaving parishioners to worship underground until after the Civil War. The congregation rebuilt and grew stronger, eventually winning campaigns for voting rights and political representation.

Its lead pastor, state Sen. Clementa Pinckney — among the dead — recalled his church's history in a 2013 sermon, saying "we don't see ourselves as just a place where we come to worship, but as a beacon and as a bearer of the culture."

"What the church is all about," Pinckney said, is the "freedom to be fully what God intends us to be and have equality in the sight of God. And sometimes you got to make noise to do that. Sometimes you may have to die like Denmark Vesey to do that."

Pinckney, 41, was a married father of two and a Democrat who spent 19 years in the South Carolina legislature after he was first elected at 23, becoming the youngest member of the House.

U.S. Attorney General Loretta Lynch said the attack would be investigated as a hate crime.