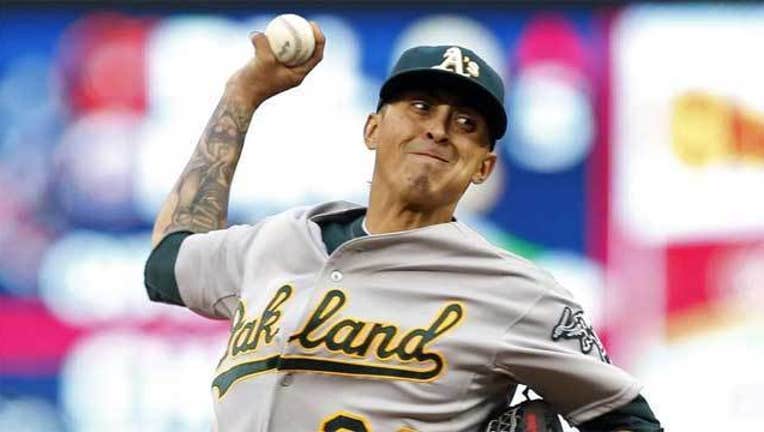 MINNEAPOLIS (KTVU-AP) - Jesse Chavez struck out seven and allowed one unearned run in 7 1-3 innings and the Oakland Athletics snapped Minnesota's five-game winning streak with a 2-1 victory over the Twins on Tuesday night.

Chavez (1-2) gave up four hits and needed just 87 pitches for his first victory of the season. Billy Butler had two hits and an RBI and Billy Burns added two hits and a stolen base for the Athletics. Tyler Clippard went 1 2-3 innings for his third save in four chances.

Trevor May (2-2) gave up two runs on five hits and struck out three in 5 2-3 innings. Torii Hunter had two hits for the Twins, who were looking for their first six-game winning streak since 2011.

Chavez was masterful in his third start of the season, pitching like he has no intention of returning to the bullpen anytime soon. He started the season there and was inserted into the rotation when Jesse Hahn missed a start because of a blister.

He used all four of his pitches, painting the black to keep a Twins offense that had scored 39 runs during its five-game winning streak completely off balance. He needed just 62 pitches to get through six innings, but left the mound in a huff in the eighth after first baseman Ike Davis made a throwing error to squander a potential inning-ending double play.

Brian Dozier followed with a flare off Evan Scribner to get the Twins on the board, but Clippard struck out Hunter and got Joe Mauer to fly out to left field to strand the tying run on third base.

The A's got on the board in the first inning thanks in part to a fortuitous bounce. Butler lifted a fly ball down the right field line and Hunter made a long run and leaped at the wall to try to bring in the third out of the inning. But his left arm hit the wall hard and the ball popped out, and Butler followed with a base hit to right to score Burns.

Brett Lawrie drove in the other run for Oakland, a bloop to right off of Brian Duensing in the sixth.

Athletics: Manager Bob Melvin said OF Coco Crisp is closing in on joining the team. He's been on the disabled list since April 4 after needing surgery on his right elbow. Crisp was getting treatment in Oakland on Tuesday and Melvin said a decision on his return will likely be made on Wednesday. … LHP Sean Doolittle, who has been on the disabled list since April 4 with a strained left rotator cuff, threw 25 pitches in a bullpen. Melvin said he could throw to hitters on Friday in Seattle.

The Twins send RHP Kyle Gibson (2-2, 3.56) to the mound for Game 3 of the series against LHP Scott Kazmir (2-0, 1.62). Gibson is coming off of a stellar outing in which he pitched eight scoreless innings to beat the White Sox. Kazmir ranks third in the American League in ERA and is holding opponents to a .178 batting average.