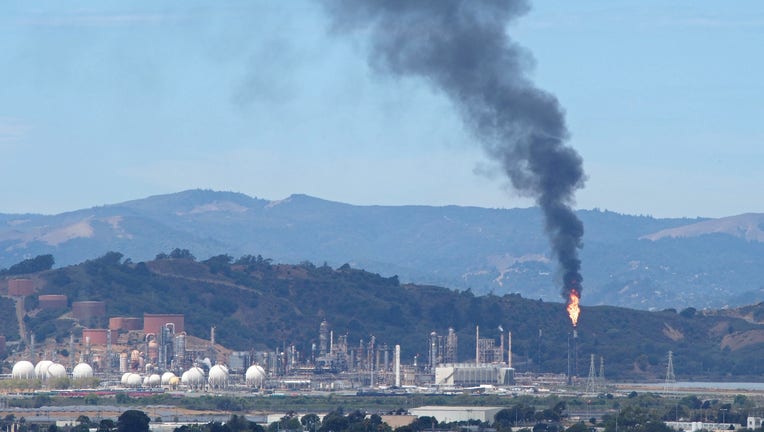 RICHMOND, Calif. - The Chevron Richmond Refinery issued a community warning as a tall plume of black smoke rose from the refinery and above the East Bay late Friday morning and into the early afternoon.

The company announced the flaring had stopped at 2:25 p.m. about three hours after it began. However, intermittent flaring is still possible, they said.

The warning was level one, the lowest on the scale, and was issued because the smoke was visible, Chevron Richmond said in a Facebook post.

The post said the smoke was from "flaring activity due to an upset at a process unit."

Flares are important to the refinery's safe operations, the announcement said, and are used in refineries to relieve pressure during refining processes.

Asked whether the incident had posed any danger to the public,
Brian Hubinger, a Chevron spokesman, said: "We do know that Richmond Fire (Department) as well as our emergency services as well as county health were all out taking air samples, and I'm not aware of any levels of concern that were identified."

Residents were advised to go to www.richmondairmonitoring.org to keep track of current air quality data.

The Center for Biological Diversity points out that Richmond's Chevron Refinery has had more flare up incidents than the area's other four refineries in recent years, including 28 episodes in 2019.

A lawsuit stemming from an August 2012 fire at the refinery, that caused hundreds of residents to complain about respiratory problems, was settled with Cal/OSHA in 2017.

“This massive plume of smoke spewing into the air we breathe should be the last straw for the Newsom administration and local air regulators,” said Hollin Kretzmann, an attorney at the Center for Biological Diversity. “Regulators have allowed this refinery to foul our air again and again and again, and regulatory slaps on the wrist aren’t enough to protect the lungs of nearby residents. It’s time for the governor to end refinery pollution by shutting this dangerous place down and leading a just transition away from dirty fossil fuels.”

The smoke plume could be seen for several miles.