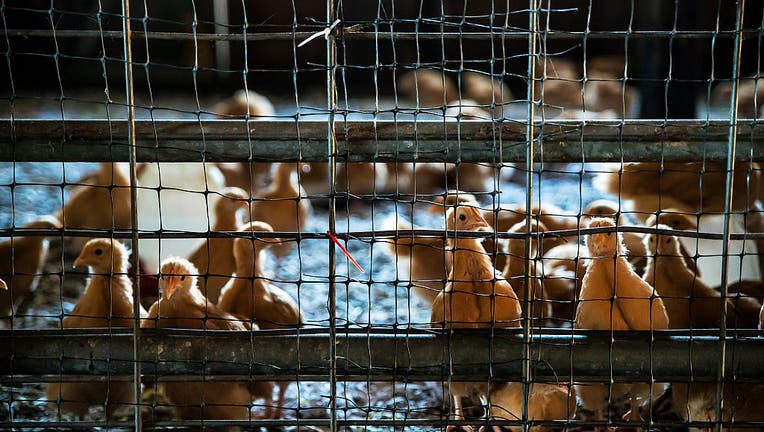 LIVINGSTON, Calif. - A chicken processing plant in central California has been ordered to shut down after it became the site of one of the largest and most severe COVID-19 outbreaks in the state, health officials said.

The order to close the Foster Farms Livingston Facility comes after at least 358 employees have tested positive, and eight employees have died due to the coronavirus, according to a letter obtained from the Merced County Health Department, the Merced Sun-Star reported Thursday.

The plant was ordered to shut down on Wednesday but Merced County’s spokesperson Mike North said Thursday county officials issued a 48-hour stay to the shutdown order to “help facilitate logistics associated with any necessary closure,”

North said the enforcement stay came after officials received a phone call from the U.S. Department of Agriculture’s secretary for food safety. He gave no other details.

It wasn’t immediately clear how Foster Farms would respond to the shutdown order. A request from comment from The Associated Press on Friday was not immediately answered.

“Foster Farms’ poultry operation in Livingston, California, has experienced an alarming spread of COVID-19 among its workers. Nobody can ignore the facts: It’s time to hit the reset button on Foster Farms’ Livingston plant,” California Attorney General Xavier Becerra said in a statement.

The California Department of Public Health also issued a statement to support the county’s action with Acting State Health Officer Erica Pan saying Foster Farms needs to understand ”it has a legal obligation to comply with public health orders and guidance, as well as an obligation to its workers and to the people of Merced County and surrounding counties."

The outbreak at the Livingston Facility accounts for 18% of COVID-19 deaths in the county under age 65, 7% of total county deaths, and 4 out of 10 coronavirus deaths in Livingston, the health department said.

The multi-billion dollar company employs about 12,000 people in turkey processing in Turlock and at chicken plants in Livingston, Fresno and Porterville as well as in Oregon, Washington, Louisiana, and Alabama. About 3,750 people work at the Livingston facility, one of the world’s largest chicken plants.

In their letter, the state health department said the Livingston plant outbreak was of particular concern because “other Foster Farms facilities in multiple counties also are experiencing outbreaks.”

The letter did not provide any details of the other plant outbreaks.

In the letter, health department officials say they attempted to curb the Livingston outbreak several times to no avail.

CalOSHA visited the Livingston facility alongside the county health department on Aug. 3 and noticed the county’s initial recommendations had not been adopted. According to the letter, the county reissued testing directives on Aug. 5 and Aug. 11 that went unmet.

As a result, the State Attorney General’s Office, the California Department of Public Health and the county health department “worked with Foster Farms to limit the impact of the closure and could not reach agreement,” according to the statement.

“The closure of this plant is the only way to get the outbreak at Foster Farms swiftly under control. Our hearts are with the eight families who have lost a loved one,” said Merced County Public Health Office Dr. Salvador Sandoval in the statement.