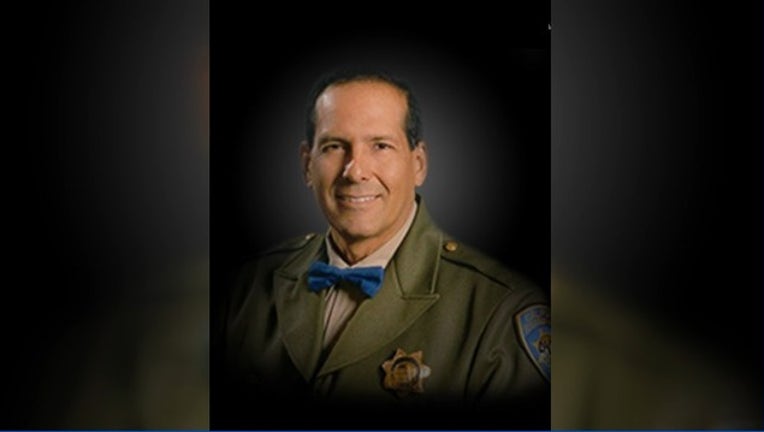 California Highway Patrol Sgt. Steve Licon was killed by a suspected drunk driver on Saturday while he was on the side of the road with a vehicle he pulled over for speeding.

LAKE ELSINORE, Calif. (AP) - A Southern California man was arrested on suspicion of murder and driving drunk in the death of a motorcycle officer with the California Highway Patrol, officials said Sunday.

Michael Callahan of Winchester was booked on the charges in the death of California Highway Patrol Sgt. Steve Licon, said Officer Steve Carapia.

Callahan is suspected of driving drunk Saturday afternoon when he crossed over the right shoulder of Interstate 15 in Lake Elsinore, crashing into Licon and a car he had pulled over for speeding.

Licon died at a nearby hospital. The family of four in the car he had pulled over weren't hurt.

It's unclear if Callahan has an attorney. Inmate records show he has a court appearance set for Wednesday.

"We have uncovered evidence which shows gross negligence both during and before this tragic collision," Lucio said at a Sunday news conference.

He declined to explain what the evidence was. Ultimately, prosecutors will decide what charges to file.

Licon was a 27-year veteran of the agency and is survived by his wife, daughter and stepdaughter.

Licon's body was taken to the coroner's office in a slow and somber procession on Saturday night.

Acting Gov. Eleni Kounalakis ordered flags to be flown at half-staff at the state Capitol, and the California Highway Patrol is holding a bell tribute ceremony in his honor on Monday.

Carapia, who knew Licon for six years, said the sergeant was well-liked and known for his work ethic and a distinct and quirky high-pitched laugh.

He said Licon loved his job and the fact that his office was on a motorcycle.

Lucio said Licon used to be his sergeant when he was coming up in the agency and helped shape his career and that of many other younger officers.

He said the sergeant's death should be a strong reminder to the public that drinking and driving is never acceptable.

"We lost a darned good sergeant," he said. "He's going to be missed."

Police departments and officers across the state took to social media to post about Licon.

CHP Commissioner Warren Stanley said Licon was a great leader "who sacrificed his life serving the people of California."

CHP Headquarters tweeted that "our hearts are heavy ... Rest easy brother, we have the watch from here."