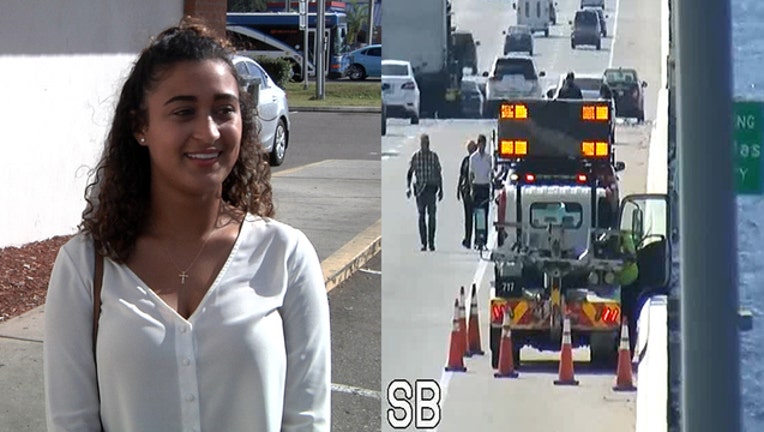 CLEARWATER (FOX 13) - A Clearwater woman likely saved a man's life, simply because she trusted her instincts and showed compassion.

The woman stopped to help a man who was moments from jumping off the Howard-Franklin Bridge Thursday.

Nicole Oyola told FOX 13’s Jordan Bowen she first thought the man was pulled over, having car trouble. She was going to keep driving, but something made her stop.

Thanks to her intuition, the man is receiving counseling.

Nicole Oyola was driving across Interstate 275 toward Pinellas County Thursday afternoon when she saw a man in his early twenties at the edge of the bridge.

Her gut instinct: Something wasn’t right. The 23-year-old made a split-second decision to pull over.

“I started talking to him. I told him, ‘You're worth it. You're enough. I don't know what you're going through, but I love you and God loves you and everything is going to be okay.’”

Kind words from a complete stranger made all the difference.

Oyola says the young man was overwhelmed with emotion; he was shaking and, at first, did not even acknowledge she was there.

“He looked at me, and after he looked at me he started crying and I said, ‘I just want to give you a hug.’ So he came to the other side and I gave him a hug.’”

A simple act of compassion can make all the difference, according to Crisis Center of Tampa Bay CEO Clara Reynolds.

“Personal interaction from somebody that just says, ‘You know what? I care about you. I'm here for you. I don't want to see you go.’ That is the game changer. That can be the live-saver,” Reynolds explained.

After the man got off the ledge, with his permission, Oyola called the police. The officer who arrived prayed with the man before taking him somewhere he could get help.

“God has a purpose for everyone. I believe in that, so I stopped. I just wanted to help him feel better. If I was going through that, I would want someone to stop for me too,” Oyola said.

According to Reynolds, because the man was so close to jumping, he's considered a threat to himself and will likely be held under the Baker Act for 72 hours.

If you or someone you know is having suicidal thoughts, don't hesitate. Call 2-1-1 for confidential help from a trained professional, 24 hours a day, seven days a week.