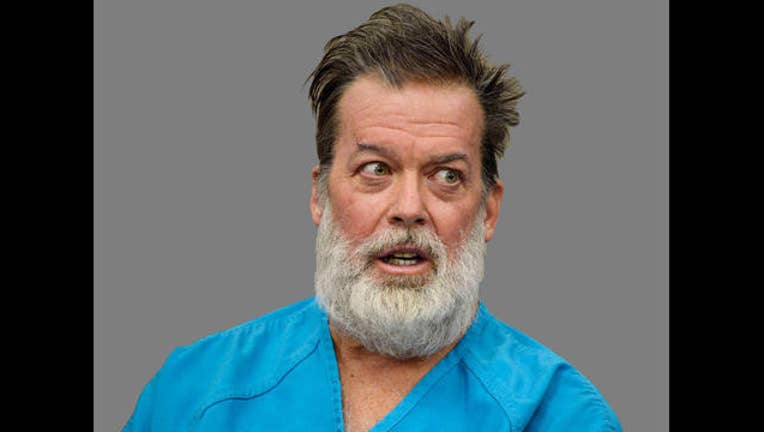 COLORADO SPRINGS, Colo. (AP) -- A man who acknowledged killing three people at a Colorado Planned Parenthood clinic is mentally incompetent to continue with his criminal case, a judge ruled Wednesday, stalling the proceedings and potentially setting the stage for a mental health defense.

The decision by Judge Gilbert Martinez puts the case against Robert Dear, 57, on hold until treatment restores his ability to understand the proceedings and assist in his defense. He will be sent to the state psychiatric hospital, and his mental health will be reviewed in August.

Two psychologists have found he has a delusion disorder, which they said keeps him from trusting almost anyone, including his lawyers. Martinez agreed with their findings, writing in his order that Dear's "perceptions and understanding are not rational and are not grounded in reality."

As he was led out of the courtroom, Dear yelled at the judge: "That's called prejudiced! Prejudiced! Filthy animal!"

Dear is charged with 179 counts, including murder and attempted murder, stemming from the Nov. 27 shooting at the Colorado Springs clinic that also left nine injured.

During previous courtroom outbursts, he has declared himself a "warrior for the babies" and said he was guilty. He told investigators he attacked the clinic because he was upset with the reproductive health organization for "the selling of baby parts."

Martinez ordered the competency exam in December after Dear announced that he wanted to fire his public defenders and represent himself. Two psychologists who interviewed Dear testified that they agreed he is not competent and that his delusion disorder makes him believe the FBI is persecuting him.

Dear told people in phone calls from jail that he believes his attorneys' attempt to have him declared incompetent is part of a plot to diminish his message opposing abortion. He claims they want him committed to a psychiatric hospital so they can "silence him forever."

He told the psychologists he did not want to be declared incompetent because it would mean "forced medication."

The Colorado Mental Health Institute at Pueblo, where Dear will be sent, can force people to take medication over their objections. His treatment will likely include a mix of psychotropic drugs and therapy to treat his disorder, as well as education about the proceedings against him.

Restoring Dear to competency could take months or longer. But the overwhelming majority of defendants initially determined to be incompetent are eventually able to understand the proceedings and stand trial, said Steven Pitt, a forensic psychiatrist who has conducted competency exams but is not involved in Dear's case.

Prosecutors argued that Dear's courtroom disruptions showed he understood the case against him. They have not decided whether to seek the death penalty against the man described by family and acquaintances as a man with a violent temper, anti-government sentiments and longstanding disdain for abortion providers.

Dear has not entered a plea. If and when his court case resumes, the incompetency finding could help the defense during the trial and a potential sentencing phase.

"In a case of this magnitude when a defendant is initially found incompetent to stand trial and is then restored to competency, there is a strong possibility that there will be a mental health defense," Pitt said. "It is an absolute certainty that the defendant's mental health history will be front and center during the penalty phase."

The psychologists who interviewed Dear recently released court documents showing Dear idolized Paul Hill, an abortion foe who killed a Florida doctor more than two decades ago. Dear also told investigators he put glue in the locks at an abortion clinic when he lived in South Carolina, a common protest technique among activists trying to shut down such facilities.

He spent most of his life in North and South Carolina before moving recently to an isolated community in Colorado's mountains, where he lived in a trailer with no electricity.

He held police at bay for more than five hours during the attack, scattering hundreds of post-Thanksgiving shoppers who scrambled to hide inside surrounding buildings until the standoff ended.