The PSA is part of a campaign by the Concussion Legacy Foundation to steer children under 14 years old into flag football and away from the contact version of the sport.

BOSTON (AP) - Everybody seems to be having fun when the kids in a new public service announcement are just playing football, until one boy is thrown to the ground and the background music turns ominous.

Then, the coach starts handing out cigarettes.

"Tackle football is like smoking," a youthful voice-over says as a smiling, motherly type lights a cigarette for one of the pre-teen players. "The younger I start, the longer I'm exposed to danger."

"Tackle Can Wait " is part of a campaign by the Concussion Legacy Foundation to steer children under 14 years old into flag football and away from the contact version of the sport. The organization says children who start playing tackle football at the age of 5 have 10 times the risk of developing the degenerative brain disease chronic traumatic encephalopathy compared to those who wait until they are 14.

"Tackle football is really a man's game, and it's incredibly dangerous to the developing brain," CLF co-founder Chris Nowinski says in a video accompanying the ad .

Some states, including California, New York and Illinois, have discussed banning tackle football for children under 12. Until then, the PSA hopes to let parents know about the risks.

According to the foundation, the ad released Thursday cost $126,095 to produce. Many of the services were donated by those who have been affected by CTE, the degenerative brain disease that has been connected to repetitive blows to the head in contact sports like football and boxing.

The spot's creator is Angela Campigotto-Harrison, whose father, Joe Campigotto, played college football and developed stage 4 CTE even though he was never diagnosed with a concussion. Director Rebecca Carpenter, whose father played 10 years in the NFL and spent three more decades as a coach , worked for scale; Lew Carpenter was also diagnosed with advanced CTE.

Look closely, and you may notice that the referee in the PSA is former San Francisco 49ers linebacker Chris Borland, who retired from the NFL at the age of 24 after one season — and two diagnosed concussions.

"Waiting to play until later is better for the health of young athletes and obviously better for their brains," Borland said in a separate video . "We don't need to use young kids as guinea pigs. We can retool the game where they can still glean the benefits, enjoy themselves, get exercise and delay tackle football until junior high or high school." 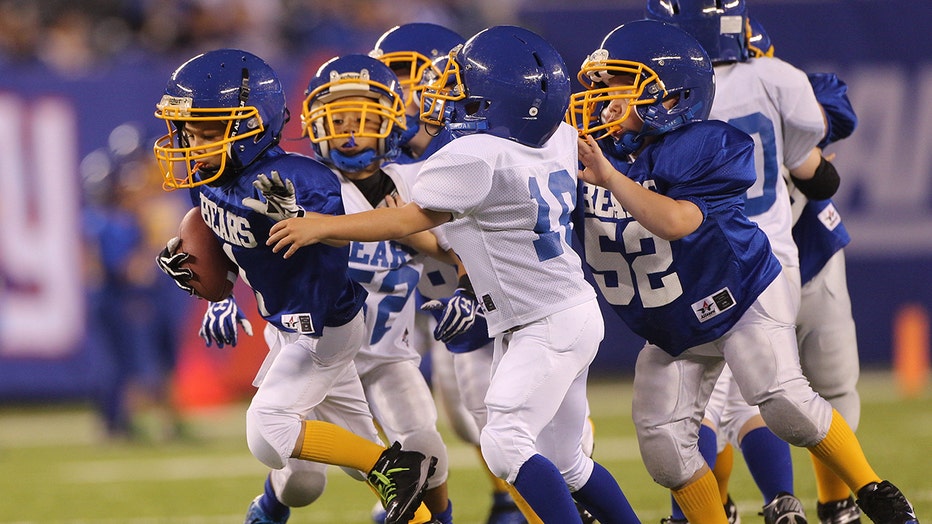 Young boys playing football during the half time break during an NFL pre-season match. A new PSA takes aim at the dangers of tackling in youth football. (Tim Clayton/Corbis via Getty Images)

The PSA, which will be released for TV, digital and social media, carries a note that the smoking shown on screen is simulated.

The behind the scenes video notes that the football was also safe.

"During filming, no players were allowed to tackle," the disclaimer says. "A stunt coordinator oversaw the production as two certified teenage stunt actors simulated tackling."