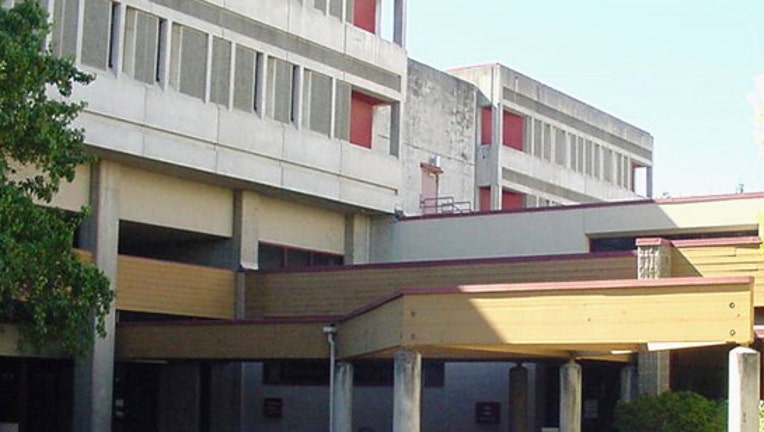 VACAVILLE, Calif. - A Contra Costa County Sheriff’s deputy who was convicted of a DUI and didn’t pay his bridge toll for five months in 2016 is still on the job, according to interviews and documents released under a police transparency law.

Sheriff David Livingston wanted to fire Deputy Christopher Spadaro after police in his hometown of Vacaville arrested him for driving with a blood alcohol content of .14 percent – nearly twice the legal limit, which is also when officers learned he hadn't been paying his bridge tolls, according to a review of nearly 100 pages of internal police reports.

The Solano County District Attorney confirmed to KTVU that Spadaro pleaded guilty to the misdemeanor DUI.

The previously unseen documents were released on Tuesday, more than three years after the arrest occurred because of SB 1421, a law that went into effect last year mandating that police make public certain types of records.

Livingston found that Spadaro violated three policies, including lying to officers initially about how much he drank. Livingston also found Spadaro’s conduct “unbecoming of an officer,” especially since Spadaro acknowledged that he didn’t pay his bridge toll on his way from Vacaville to the Martinez Detention Facility every day for nearly half a year. Spadaro still currently works at the maximum security and primary intake facility in Martinez , according to an operator who answered the phone at the sheriff's office and said that he still works there. He did not return a call or email seeking comment.

The police reports shows that when the officer who stopped him for driving  mph in a 35 mph zone and making an illegal U-turn on Nov. 24  saw Spadaro’s paper plates on his car, he asked him how he paid his bridge toll. Spadaro answered, “Um, I don’t,” the police reports state, adding that Spadaro admitted to allowing his Fastrak to lapse. 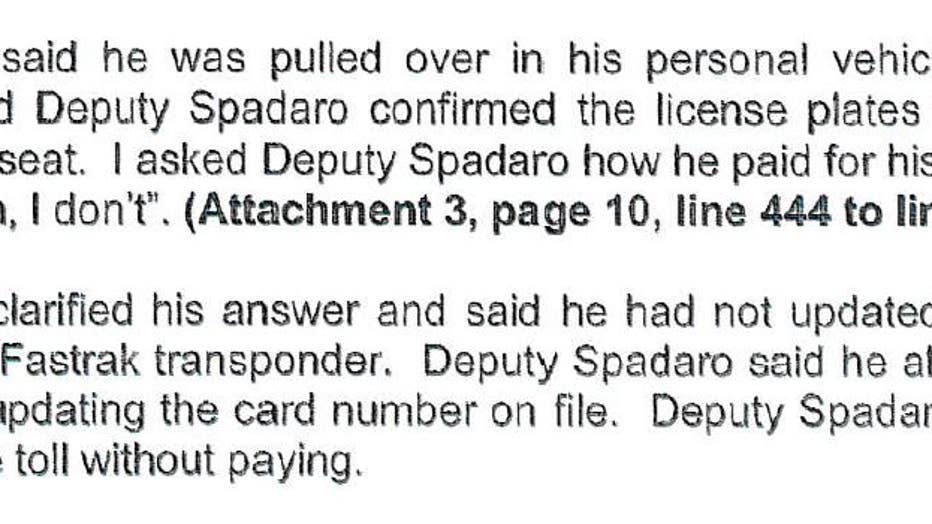 “Deputy Spadaro’s admitted bridge toll violation, if discovered by the public, would cause the residents of Contra Costa County to view the Sheriff’s Office in a negative light and erode the public trust,” Capt. Chris Simmons wrote in his Internal Affairs memo to the undersheriff.

But Spadaro was able to avoid termination, legal papers show, and his ultimate discipline resulted in getting six months of pay at a reduced rate of 5 percent. The terms of the settlement, arranged by Jonathan Murphy of the Rains, Lucia, Stern law firm, also stated that Spadaro could not apply for a promotion for three years and must submit to random drug and alcohol testing. It is unclear if those terms have expired or not. Murphy did not return an email and call seeking comment on Wednesday.

The sheriff’s office did not respond for comment either.

Police reports from Vacaville show that Spadaro had spent the evening before his arrest at Tiki Tom’s in Walnut Creek to sing karaoke with some co-workers. He had three drinks there, police reports indicate. Then he went to Masse’s in Walnut Creek, and had one drink there. Next, he told officers he went by himself to Thompson’s Corner Bar in Fairfield where he listened to music but didn’t drink. Finally, he stopped at Ms. Darla’s in Vacaville, where he had one drink. When he was first stopped by police, he told officers he had only one beer, reports state. When police pulled him over, they noted he smelled like alcohol and his eyes were bloodshot. They also noted that he was very cooperative and that when he was interviewed later about his conduct, he told superiors that he realized he violated policy by drinking “without question.”

There are 26 minutes of body camera video taken by Vacaville police, according to a lieutenant. The sheriff's department did not release the video, deferring requests to Vacaville. Vacaville police told KTVU that it is the sheriff's responsibility to release it.

The Contra Costa County Public Defender's office did not know about Spadaro's arrest or sustained findings until this week. It's unclear what effect, if any, the information will have on past cases.

"We are currently investigating the impacts of Deputy Spadaro's misconduct on recent and pending cases where he was a material witness, " Chief assistant Public Defender Ellen McDonnell said in a statement. "Deputy Spadaro's acts of lying to the police during a criminal investigation and other misconduct should have been disclosed to our office as exculpatory evidence under Brady v. Maryland."

She said that this "evidence of misconduct was not disclosed to us until this week despite the fact that we requested it in January of 2019, nearly a year ago...Transparency and prompt compliance with SB 1421 and Brady are necessary to ensure due process for everyone in our community."