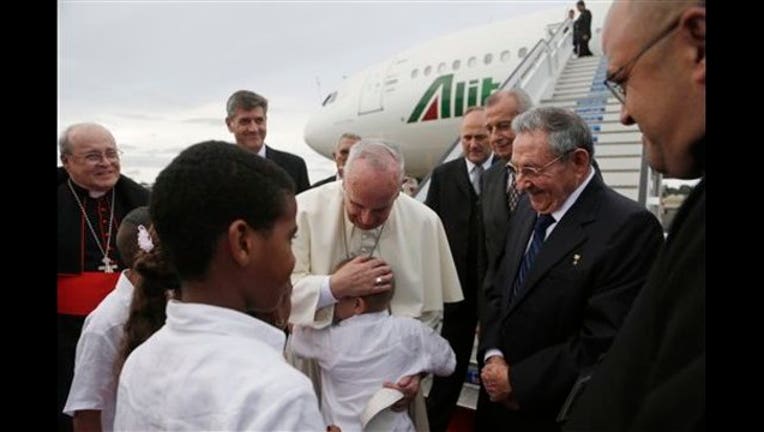 In this Saturday, Sept. 19, 2015 photo, Pope Francis hugs a boy as Cuba's President Raul Castro looks on after landing at the airport in Havana, Cuba. (Ismael Francisco/Cubadebate Via AP)

WASHINGTON (AP) — In a story Sept. 25 about Pope Francis' visit to Washington, The Associated Press incorrectly spelled the last name of a guest at the White House. The guest's name is Nigel Stacey, not Stacy.

A corrected version of the story is below:

Papa! Thousands cheer pope on streets of Washington; he calls for action on climate change

By JULIE PACE and NICOLE WINFIELD

WASHINGTON (AP) — Cheered by jubilant crowds across the nation's capital, Pope Francis forged common cause Wednesday with President Barack Obama on climate change, immigration and inequality, as the popular pontiff signaled he would not sidestep issues that have deeply divided Americans.

On his first full day in the United States, the pope also reached out to America's 450 bishops, many of whom have struggled to come to terms with his new social justice-minded direction for the Catholic Church. He gently prodded the bishops to forgo "harsh and divisive language," while commending their "courage" in the face of the church's sexual abuse scandal — rhetoric that angered victims he may meet with later in his trip.

Late in the day, Francis — the first pope from the Americas — canonized Junipero Serra, the famous 18th century Spanish friar who brought the Catholic faith to California.

The 78-year-old pontiff's whirlwind day in Washington enlivened the often stoic, politically polarized city. Excited crowds lined streets near the White House to catch a glimpse of the smiling and waving Francis as he passed by in his open-air "popemobile." He seemed to draw energy from the cheering spectators, particularly the children his security detail brought to him for a papal kiss and blessing.

In keeping with his reputation as the "people's pope," Francis kept Obama and other dignitaries at the White House waiting so he could spend time greeting schoolchildren gathered outside the Vatican's diplomatic mission where he spent the night.

With flags snapping, color guard at attention and a military band playing, Francis stepped from his modest Fiat onto the South Lawn on a crisp fall morning that felt as optimistic as his own persona. Pope and president stood on a red-carpeted platform bedecked with red, white and blue bunting for the national anthems of the Holy See and the United States.

The pope's remarks were brief, yet pointed.

Speaking in soft, halting English, Francis said that as the son of an immigrant family, he was "happy to be a guest in this country, which was largely built by such families." The Argentine pope was born to Italian parents who left their home country before he was born, and he has been a forceful advocate for humane treatment of migrants.

Francis was enthusiastic in his embrace of Obama's climate change agenda, specifically praising the president for taking steps to reduce air pollution. In a firm message to those who doubt the science of climate change, he said the warming planet "demands on our part a serious and responsible recognition" of the world that will be left to today's children.

"Accepting the urgency, it seems clear to me also that climate change is a problem which can no longer be left to a future generation," said Francis, who has been pressing his environmental message ahead of climate change talks in Paris later this year.

The pope's messages were warmly welcomed by Obama, who has prodded his Republican rivals for action on immigration and climate change with limited success. In his own remarks heralding the pope's arrival at the White House, Obama thanked Francis for reminding the world of the "sacred obligation to protect our planet - God's magnificent gift to us."

The pope and president were also aligned in their call for addressing global poverty and inequality, with Obama praising Francis' call to put "the least of these at the center of our concern."

The pope had something for conservatives, too, with a clear call to protect religious liberties — "one of America's most precious possessions."

"All are called to be vigilant,' he said, "to preserve and defend that freedom from everything that would threaten or compromise it."

U.S. bishops and conservatives who have objected to the Obama administration's health care mandate and the recent Supreme Court legalization of same-sex marriage have made religious freedom a rallying cry, with a largely domestic focus.

After their opening remarks on the lawn, Obama and Francis met one-on-one for 40 minutes in the Oval Office, joined only by an interpreter. White House aides said the discussion was private, and declined to say whether the leaders addressed subjects on which they sharply differ, including abortion and gay marriage.

While the pope's visit was analyzed for political implications in a city already consumed by next year's U.S. presidential election, for Catholics and many other Americans Francis' six-day, three-city trip to the U.S. is an opportunity to connect with a humble church leader who has rejuvenated many of the country's believers.

"He's made the church more of an obtainable thing," said Nigel Stacey, a law student who arrived at the White House in the middle of the night to get a good place to stand for the arrival ceremony. "It's more relatable. You see what he does and you can see yourself emulating that."

Washington resident Theresa Wellman, who brought her mother and five children to watch the pope's parade through the streets of the nation's capital, called Francis "a breath of fresh air."

"He's changed the tone into a loving, merciful church to serve the poor," Wellman said.

The church's leadership in the U.S. has sometimes been more skeptical of the pope, wary of the divide between his focus on a merciful church and the culture wars that America's bishops have been involved in over abortion and gay rights.

In his remarks to U.S. bishops at the Cathedral of St. Matthew the Apostle, Francis emphasized one of the defining messages of his papacy, to focus less on defending church teaching and more on compassion. The pope told the American church leaders that "harsh and divisive language does not befit the tongue of a pastor" and he encouraged them to speak with anyone, no matter their views.

In his first comments in the U.S. on the clergy sex abuse scandal that erupted in 2002, the pope praised the bishops for a "generous commitment to bring healing to victims" and for acting "without fear of self-criticism."

"Almost without exception, they have shown cowardice and callousness and continue to do so now," said Barbara Dorris, president of SNAP, or Survivors Network of those Abused by Priests.

Under public pressure, the U.S. Conference of Catholic Bishops pledged to oust any guilty clergy from church work and enact safeguards for children. However, some victims say the bishops still haven't fully accounted for sheltering abusers. This year, three bishops resigned over their failures to protect children.

Later Wednesday, Francis celebrated a Mass of Canonization, the first ever on U.S. soil, for Junipero Serra in Spanish. Several thousand of the 25,000 tickets to the event were set aside for Spanish-speaking people, many from California. The Basilica of the National Shrine of the Immaculate Conception erected a temporary sanctuary outdoors for the Mass, which lasted into the evening.

On Thursday, Francis planned to deliver the first papal address ever to Congress, speaking to Republican-majority legislators deeply at odds with Obama on many of the same issues the leaders addressed at the White House.

Follow Julie Pace at http://twitter.com/jpaceDC and Nicole Winfield at www.twitter.com/nwinfield