Moderna seeks authorization for COVID-19 vaccine for children under 6

Moderna has asked the FDA for authorization on its COVID-19 vaccine to be administered in children under 6 years old. Moderna plans to provide two low-dose shots for babies, toddlers and preschoolers.

JOHANNESBURG - Researchers in South Africa have found two new Omicron sub-variants that were able to evade antibodies from previous infections and vaccinations, Reuters reported on May 1.

According to a study, led by the Africa Health Research Institute in South Africa, researchers found that blood samples from vaccinated individuals showed their antibody production dropped eight times when tested against the two Omicron sub-variants, BA.4 and BA.5, according to Reuters.

"The vaccinated group showed about a 5-fold higher neutralization capacity ... and should be better protected," said the study, a pre-print of which was obtained by Reuters.

The new findings follow a warning from South Africa’s health minister who said last week the country has already likely entered a new wave of COVID-19 earlier than expected following a recent rise in hospitalizations and infections.

The increase in new cases has been dominated by the BA.4 and BA.5 lineages of the omicron variant which dominated the country’s earlier wave of the virus.

"Whichever way you look at it, it does suggest that we may actually be entering the fifth wave much earlier," Health Minister Joe Phaahla said Friday at a televised press briefing.

He said officials will be watching carefully over the next few days to determine if the increase is sustained which would confirm a new wave. 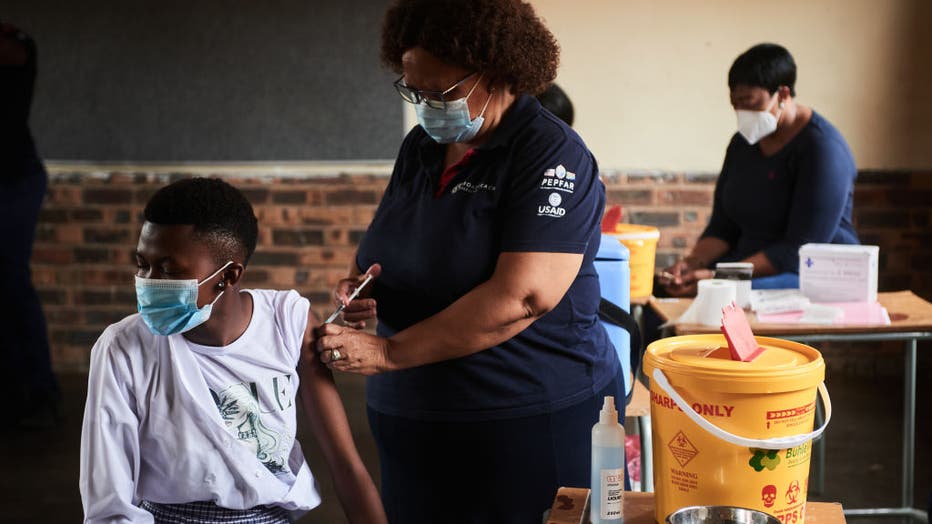 A health worker administers a Covid-19 vaccine to a student during a rural vaccination drive by Broadreach NGO at Duduzile Secondary School in Mpumalanga, South Africa, on Wednesday, March 9, 2022. (Photographer: Waldo Swiegers/Bloomberg via Getty Images)

The country’s new infections are now several thousand per day, up from a few hundred a few weeks ago.

According to Phaahla, there was currently no information indicating the emergence of a new strain, which scientists had earlier suggested may drive the country’s fifth wave, expected during the country’s upcoming winter season from May into June.

"We have always been informed that when a new wave comes, it will be driven by a new variant, but at this stage we have not been alerted to a definite new variant except changes in the omicron," said Phaahla.

Three South African provinces — Gauteng, KwaZulu-Natal and Western Cape — currently are accounting for 85% of new infections, with the positivity rate in Gauteng and KwaZulu-Natal above 20%, he said.

Hospitalizations from the new cases are increasing but are still relatively low, Dr. Waasila Jassat from the National Institute for Communicable Diseases, said.

South Africa has experienced the highest number of infections in Africa since the beginning of the pandemic in 2020, accounting for more than a quarter of the continent’s 11.4 million cases.

More than 252,000 people in South Africa have died from the virus, but the numbers are considered to be much higher when considering the number of excess deaths recorded since the pandemic compared to the same periods before the pandemic.

Just over 44% of South Africa's adult population has been vaccinated.

The Associated Press contributed to this story. It was reported from Los Angeles.