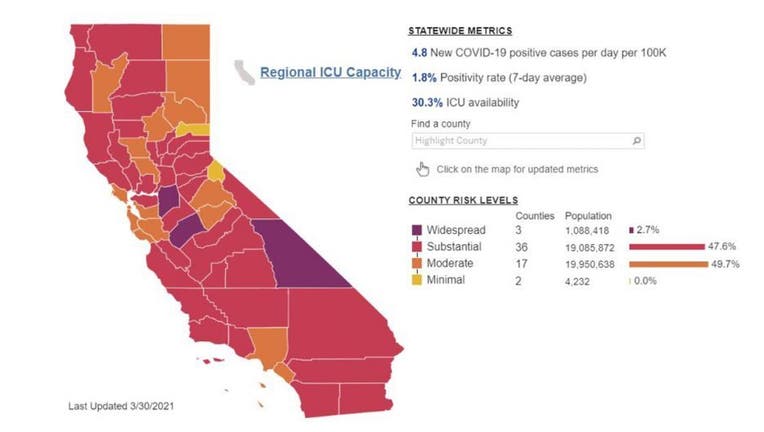 OAKLAND, Calif. - Alameda County would be in the most restrictive tier of the state's former pandemic reopening plan based on the county's current COVID-19 case data, the top county health official said Tuesday.

In a briefing to the Alameda County Board of Supervisors, county Health Officer Dr. Nicholas Moss said the county's seven-day average number of new cases per day per 100,000 residents is up to 17 and likely to increase even further.

The case numbers mean Alameda County would be firmly within the most restrictive purple tier of the old four-tiered reopening system, which included counties with case rates of seven or more per 100,000 residents.

"We saw some days with 500 cases reported over the weekend," Moss said. "So very high case numbers, higher than the peaks that we saw last summer."

The driving force behind the county's surge, Moss said, is a familiar one in the ultra-contagious delta variant.

The increase in cases prompted Alameda County to join most other counties in the Bay Area Monday in reimplementing an indoor mask mandate for both vaccinated and unvaccinated residents.

More than 1 million county residents have now been vaccinated, with 84.8 percent of the county's population 12 years and up having received at least one vaccine dose.

County public health officials are also working with local organizations like the Weekes Community Center in Hayward and Allen Temple Baptist Church in East Oakland to ensure that Alameda County's most vulnerable residents have access to vaccine doses that will protect them from serious COVID-19 illness and death.

"Most of California and, really, most of the United States is at substantial or ... high community transmission, so this is a nationwide wave," Moss said. "It's certainly been impacting us here."