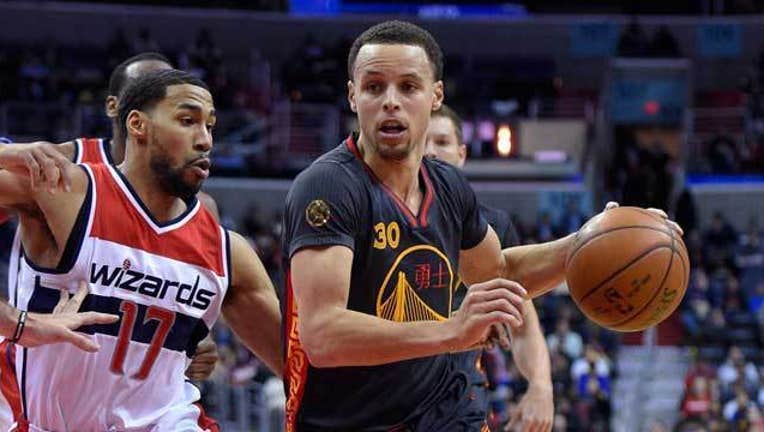 Curry returned from a one-game absence to lead all scorers with 32, Klay Thompson added 17 more and the Golden State Warriors defeated the Washington Wizards, 114-107.

Curry missed Sunday's loss at Indiana with the sore foot and played nearly 34 minutes. He hit 11 of 18 field goal attempts - many with impressive degrees of difficulty — including five of nine from 3-point range.

"It's good to have Steph Curry back doing what he does," Thompson said. "Mesmerizing the crowd, mesmerizing us and keeping us in the first half."

Curry played all but four seconds of the first quarter, scoring 13 points, as theWarriors rallied from an early deficit.

"It's still not pain free, but it felt fine," he said of his foot.

"Once you start playing the adrenalin kicks in and you don't feel anything. It was good to just break a sweat in the first quarter, and feel active and not limited at all."

Marreese Speights added 16 points off the bench for the Warriors, who have won five of six.

"I've never seen a turnover disparity like that where the game turned out to be close at the end," Golden State coach Steve Kerr said. "Little weird but we got it done."

Paul Pierce led the Wizards with 25 points, 18 in the second half. Marcin Gortat added 16 points and 11 rebounds, while John Wall chipped in 16 and 11 assists.

After dropping their fourth straight, and ninth in 11 games, the Wizards bemoaned the turnovers, but not their effort in taking Golden State to the final minutes after a pair of blowout losses.

"To give them that many more possessions, 11 more shots, makes it tough on you," coach Randy Wittman said. "Our effort was great. We play the way we play tonight, we take care of the ball better, we'll get back to winning games."

Washington's Rasual Butler's hit a 3-pointer to tie the score at 90 with 8:32 left, but the Warriors answered with a 6-0 spurt capped by Andre Iguodala's jumper.

Washington got to within three twice in the final minutes, including when a Nene basket made it 102-99, but Iguodala responded with a 3-pointer.

Pierce scored 14 of his points in the third quarter as the Wizards rallied to from six points down to briefly take the lead.

"I saw something different today than I did the last two games," he said. "Outside of our turnovers, we played with much more urgency."

Curry scored Golden State's final nine points in the third quarter, connecting for a pair of free throws, 3-pointer from the top of the key, jumper from the wing, and finally a baseline floater.

Pierce had to be helped off the court after banging knees with a Golden State player in the game's closing seconds. "Just icing it," he said afterward. "I think it'll be all right." Asked if the knee and the plane ride to Minneapolis would affect his ability to play Wednesday night, Pierce answered: "Can't break steel."

"That's crazy," Kerr said when asked about Golden State being seen as the favorite as the playoffs approach. "Nobody should favor anybody for the championship. There's going to be eight great teams in the West in the playoffs. It doesn't matter what people predict. I used to have that job, and I'd make those predictions then go home and have a beer or go play golf or something. It didn't matter what I said."

Warriors: Tied franchise record with their fifth straight win in Washington. . The starting lineup of Curry, Thompson, Harrison Barnes, Draymond Green and Andrew Bogut improved to 33-3 this season. . Improved to 1-1 on their six-game road trip.

Wizards: Beal missed his sixth consecutive game. . The double-double was the 31st of the year for Wall, and the 16th for Gortat. . It was Pierce's first 20-plus point game since Jan. 14th when he scored 32 at Chicago.

Warriors: At the Cavaliers on Thursday.

Wizards: At the Timberwolves on Wednesday.