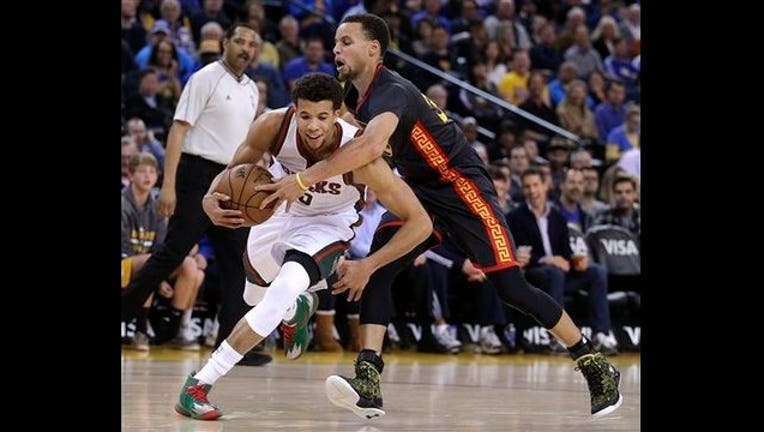 OAKLAND, Calif. (AP) — Stephen Curry shook off a rough shooting night to make three straight 3-pointers early in the fourth quarter to help the Golden State Warriors beat the Milwaukee Bucks 102-93 on Wednesday night in their return from a season-high, six-game road trip.

Draymond Green had 23 points and 12 rebounds on his 25th birthday, Klay Thompson scored 17 points and Shaun Livingston added 16 for the Warriors, who improved to an NBA-best 25-2 at home.

Giannis Antetokounmpo and Michael Carter-Williams scored 16 points each for the Bucks, who have lost six of seven games and went winless on a four-game road trip.

After playing 10 of the previous 11 games on the road, Golden State was locked in a close game until Curry found his shooting stroke in the fourth quarter.

After missing eight of his first 10 shots, Curry made three in a row from long range to give Golden State an 85-75 lead. Curry finished with 19 points and 11 assists and had his 60th career game with at least five 3-pointers and five assists — 10 more than Ray Allen, who is second on the NBA career list with 50 of those games.

Green followed with a breakaway dunk and Andre Iguodala added another slam to cap a 14-2 run as the Warriors coasted to the win.

The Warriors went from 13 points up late in the second quarter to trailing by seven early in the third as Milwaukee used an 18-0 run spanning halftime to silence the sellout crowd.

But Iguodala tied the game with a four-point play and Shaun Livingston hit back-to-back baskets to help Golden State head into the fourth quarter with a 72-71 lead.

The Warriors built a comfortable first-half lead behind eight 3-pointers and nine assists from Curry. But Milwaukee responded with 11 straight points over the final 1:31 of the second quarter to tie the game at 53 at the break on Michael Carter-Williams' long jumper just before the buzzer.

The Bucks kept it up on the third quarter, scoring the first seven points to extend the run to 18-0 and take their biggest lead of the game.

Bucks: G O.J. Mayo sat out for the fourth time in five games because of a sore right hamstring. ... PF Jared Dudley moved back into the starting lineup with Ersan Ilyasova coming off the bench after averaging 15.2 points and 7.4 rebounds in five starts.

Warriors: Golden State started a stretch of 10 home games in 12 contests after spending most of February dealing with the harsh winter in the Northeast and Midwest. "I'd like to start out by saying I'm very happy to see the sun," coach Steve Kerr said at his pregame media briefing. "It's very nice to see that orange ball in the sky that we had forgotten existed." ... Curry missed a technical foul shot early in the fourth quarter, snapping a streak of 33 straight made free throws.