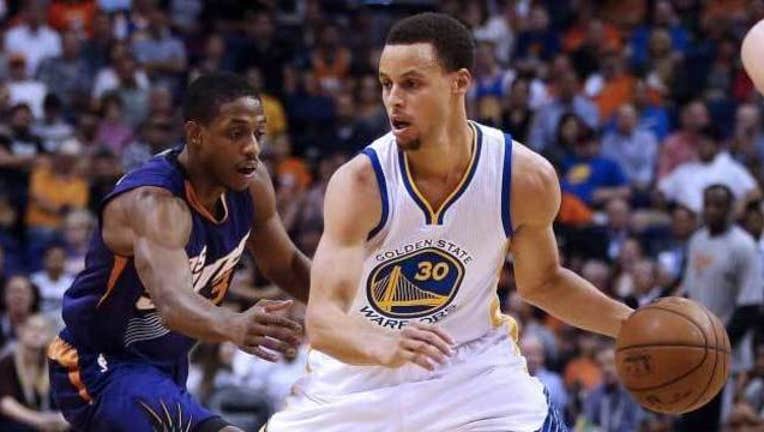 PHOENIX (AP) — Stephen Curry scored 25 of his 36 points in the second half and the Golden State Warriors beat the Phoenix Suns 98-80 on Monday night for their 50th victory of the season.

Klay Thompson added 25 for the Warriors, who at 50-12 have the NBA's best record, a half-game better than Atlanta.

Eric Bledsoe scored 19 for Phoenix. Brandon Knight had 13 before leaving the game with a sprained left ankle in the second quarter. Alex Len had 10 points and 11 rebounds.

The Warriors became the second NBA team to win 50 games this season. Atlanta did it with a victory over Sacramento a few hours earlier.

With their ninth loss in 13 games, the Suns are three games behind Oklahoma City for the final playoff spot in the Western Conference.

The game was tied at 46 at the half, then the Warriors opened it up with a 23-5 third-quarter run. Thompson's 3-pointer capped the outburst and put Golden State up 76-57 with 1:41 left in the period.

A lineup mostly made up of Suns reserves scored the next 10 points to cut the lead to 76-67 with 10:57 to play. But the Warriors scored the next eight and, with Curry leading the way, blew the game open from there.

Knight, acquired from Milwaukee in a trade deadline deal, made a strong move to the hoop and crashed to the floor as he attempted to pass to Len with 4:17 left in the first half. Knight lay on the floor, pounding the court with his fist in pain, before he was carried to the locker room.

The Warriors led nearly all the first half, by as many as 11, and were up 46-37 on Curry's driving layup with 1:55 left. Golden State committed two of its eight first-half turnovers while Phoenix finished the half on a 9-0 run, tying it at 46 on Bledsoe's layup after a steal with 43 seconds to play.

Suns: Markieff Morris didn't get much reaction from the crowd when introduced in his first home game since he criticized the fans for lack of support. ... The Morris twins were a combined 2 of 15 from the field. ... Phoenix scored fewer than 20 points in three of the four quarters.