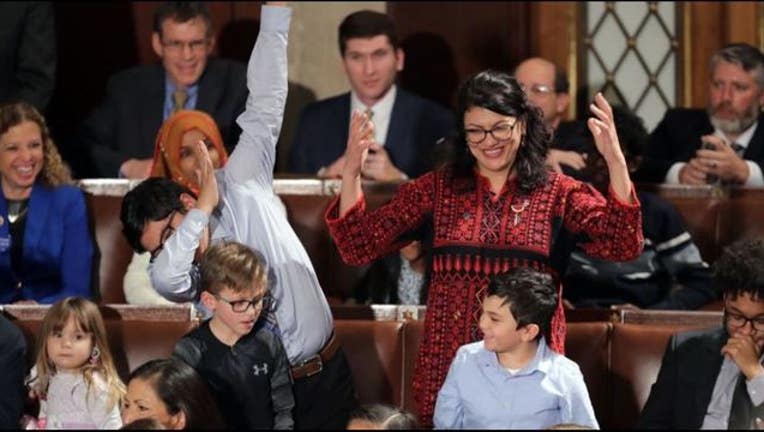 Rep.-elect Rashida Tlaib (D-MI) votes for Speaker-designate Rep. Nancy Pelosi (D-CA) along with her kids during the first session of the 116th Congress at the U.S. Capitol January 03, 2019 in Washington, DC. (Photo by Chip Somodevilla/Getty Images)

WASHINGTON (AP) - - They "dabbed" on the House floor. One tiny voice from somewhere deep in Democratic ranks yelled, "Boring!" And when their parents swore to faithfully serve as members of the new 116th Congress, many of them raised their little hands, too.

The children of the new House and Senate were the stars of Thursday's opening rituals and roll calls, reminders that whatever business awaited the grown-ups - the partial government shutdown, President Donald Trump, divided government - the new Congress is in.

Here are some key moments from the opening hours.

When her name was called, freshman Rep. Rashida Tlaib stood to cast her vote for Nancy Pelosi as speaker. Tlaib's sons, Adam, 13, and Yousif, 7, stood by her side.

Then Adam shouted Pelosi's name, too, and both followed that with a "dab" - a move favored by tweens in which the nose is nudged inside one elbow while the opposite hand is raised overhead.

But Bella Kaufman saw it. Pelosi's granddaughter, 9, jumped up from her seat in the second row and returned the salute. The House's legions of parents of both parties chuckled.

They mugged. They flashed thumbs-up. They passed around the speaker's gavel that again belongs to Pelosi.

At least two dozen of the children of the House, at least one of whom had fallen asleep during the roll call, streamed to Pelosi's side on the dais as she took her oath to serve in the post second in line to the presidency. "Come on, kids!" And up they streamed. Some excitedly jostled as she raised her right hand. Others clutched teddy bears. At least one carried a bright pink handbag.

There were so many kids up there that some were forced to stand on the stairs, around the clerk's desk and in the well.

But they all watched and applauded as Pelosi took the oath. One paged through the documents on the desk; another used his phone to record the moment as Pelosi banged the gavel and prepared to swear in the new House.

"I now call the House to order on behalf of all of America's children," she said.

She was the dark-haired girl in the velvet dress who seemed to be everywhere during the proceedings, but particularly by Pelosi's side.

When the vote was announced electing Pelosi speaker, Bella grabbed her hand and jumped for joy. When Pelosi summoned the children to the dais, there was Bella right next to her, gazing up at her grandmother. Even when she was sitting, Bella intently watched and cheered as Democrats voted.

Bella is one of Pelosi's nine grandchildren.

Trump congratulated Pelosi and called her return to the speakership a "tremendous, tremendous achievement" ahead of what's expected to be a clash of political titans from now until the 2020 elections.

If you missed the proceedings, you can get a sense of the jubilant mood from the avalanche of tweeted photos by new members walking to their oath-takings, grinning on the House floor and posing with each other. But there were solemn moments, too, as new members scored historic firsts just by being sworn in.

For example, Reps. Deb Haaland, D-N.M., and Sharice Davids, D-Kan., the first Native American women to serve in Congress, hugged and shed a few tears after they were sworn in.

They are part of a record-breaking class of new lawmakers in the House and Senate that includes the most women, the first two Muslim congresswoman and the first black women sent to Congress from Massachusetts and Connecticut. Arizona and Tennessee also are getting their first female senators.

Across the Capitol, new senators checked the place out and got their first taste of the chamber that's supposed to cool the passions of the House.

As Vice President Mike Pence swore senators in, Sen. Josh Hawley, R-Mo., peeked under his desk to see what was inside. The desks all have signatures of the senators who previously used them.

Sen. Kyrsten Sinema, D-Ariz., startled when her name was called during a routine tally and said, "Here!" She looked around for guidance and, finding none, shrugged.

CELEBS IN THE HOUSE

When Pelosi first stepped up to the speaker's chair, she turned and waved to her family sitting in the gallery. Daughter Alexandra flashed her a thumbs-up.

Then Pelosi pointed out someone else seated with her family, singer Tony Bennett, "a true American patriot," she said.

Bennett, who marched for civil rights, was one of several luminaries seated with Pelosi's family, including Mickey Hart of the Grateful Dead and Tim Gunn of the reality TV show "Project Runway."

Her guests cheered and hollered as she was sworn in and took the gavel. They laughed when the California delegation sang "California, here we come" and followed Pelosi down the center aisle.

Inside the House and Senate, you'd barely know there were hefty issues waiting to be resolved.

The government is partially shut down over Trump's demand for a wall along the U.S. border with Mexico. Members of the Democrat-controlled House are discussing investigations of Trump though they haven't decided on that.

Pence told reporters elsewhere in the Capitol that the outlook isn't so grim.

He said White House would work with Democrats and Republicans to "achieve the kind of agreement that will provide the border security that the American people need."