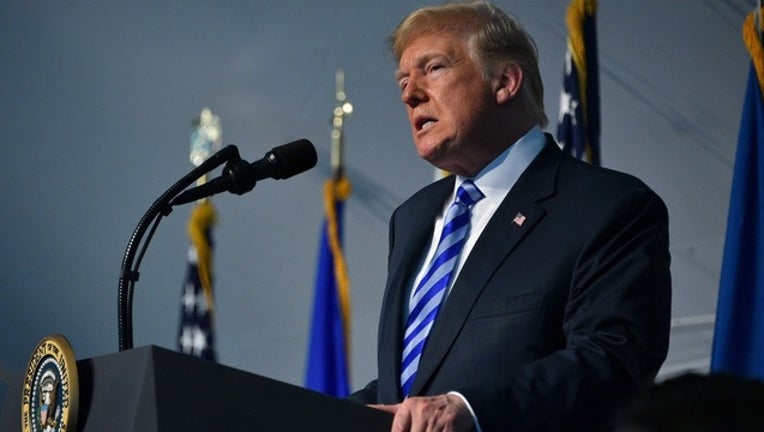 WASHINGTON (AP) - The attorneys general of the District of Columbia and Maryland said Monday that they are moving forward with subpoenas for records in their case accusing President Donald Trump of profiting off the presidency.

Trump's Justice Department lawyers filed a notice to the court Friday that appeared to challenge the Maryland judge's decision to allow the case to move forward. The president's notice that he may seek a writ of mandamus - to have the appeal heard by a higher court - is considered an "extraordinary remedy" that's hard to prove and partly rests on showing Messitte's decisions to be clearly wrong.

"We've got the discovery ready to go," said Maryland Attorney General Brian Frosh. "Their objective at this point is just to keep the doors shut, they don't want any of this information out in public and they don't want our case to move forward. So they're going to be be obstructing as much as they can."

District of Columbia Attorney General Karl A. Racine said in a statement that the subpoenas would go out to third-party organizations and federal agencies "to gather the necessary evidence to prove that President Trump is violating the Constitution's emoluments clauses - our nation's original anti-corruption laws."

Trump has been fighting multiple lawsuits that argue foreign representatives' spending money at the Trump International Hotel are violations of the Constitution's emoluments clause, which bans federal officials from accepting benefits from foreign or state governments without congressional approval.

A clue as to what entities may receive subpoenas may can be found in preservation subpoenas filed more than a year ago with 23 Trump-related entities, including The Donald J. Trump Revocable Trust, The Trump Organization, the Mar-a-Lago Club Inc. and entities related to his D.C. hotel and its management, among others.

The subpoena requires the majority of documents to be preserved from Jan. 1, 2015, on an ongoing basis. The court filings cite document categories for preservation, including those from Nov. 8, 2016, onward concerning "marketing to foreign or domestic governments, including members of the diplomatic community." Other noted categories for preservation include documents that would identify guests of the hotel and those who have rented event space, details on all finances, and "operating leases, permits, licenses, tax payments or credits to or from foreign or domestic governments."

According to the agreed-upon schedule, if there are no delays, legal discovery would conclude in early August.

"The president is engaging in very serious constitutional violations every day in our view, so we're glad to have the opportunity to bring this case to closure promptly in 2019," said Norman Eisen, chairman of the nonprofit Citizens for Responsibility and Ethics in Washington, which is co-counsel with the two jurisdictions.