Police said the gun was left accessible to the child, who shot his sister in the chest. Police said the decision to file charges will be left to the district attorney.

SOUTH FULTON, Ga. - The father of a 5-year-old girl accidentally shot by her 3-year-old cousin on Thanksgiving says the shooting was an accident.

South Fulton police say the gun went off in the Gardens at Camp Creek Apartments on Washington Road.

Police say the 3-year-old child found the registered weapon under a sofa cushion and fired it into the chest of his 5-year-old cousin, Khalis Eberhart, killing her.

"I wasn't careless. My baby was shot. I didn't do anything wrong. I am going through the pain," father Nathaniel Eberhart told FOX 5's Aungelique Proctor.

Eberhart, who was hospitalized with COVID-19 in September, told FOX 5 the family had just arrived at the apartment when the unthinkable happened.

"Not even five minutes later we were in there and you hear the pop. I thought it was a broom. I saw my nephew, he started freaking out. I grabbed her and tried to stop the bleeding. We did all we could do," the father of three said. 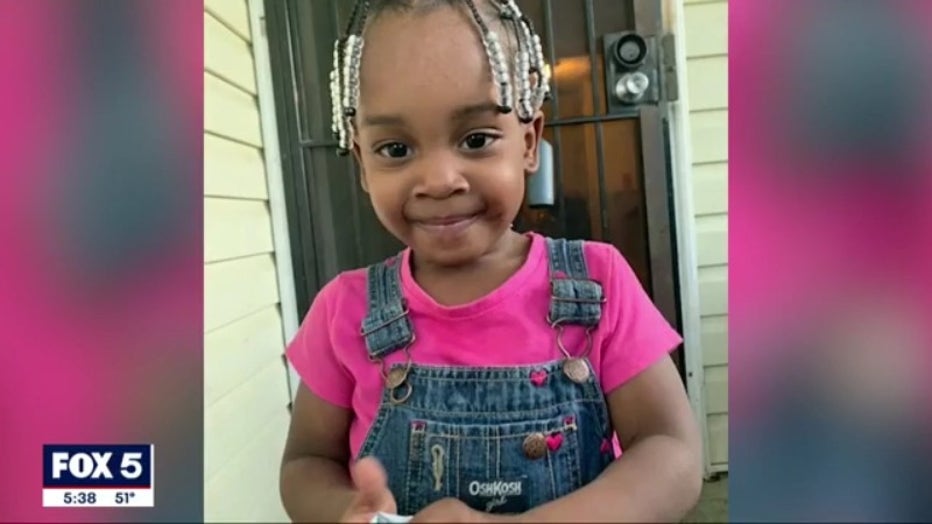 Khalis Eberhart, 5, was killed in an accidental shooting by her 3-year-old cousin (Source: Family photo).

"The weapon was just left accessible to children playing in the living room," Chief Keith Meadows of the South Fulton Police Department lamented.

The child's grandmother, Tracy Towns, says Khalis will be missed.

"She was very vibrant and had a charismatic spirit. She kept you laughing. She always had a smile on her face and that is how I want people to remember her," she said.

The police chief says the decision on whether to charge someone, in this case, will be made by Fulton County District Attorney Fani Willis.

A community is remembering a 5-year-old shot and killed on Thanksgiving night. Neighbors gathered on Saturday night.

Khalis' grandmother says this tragedy will be difficult to overcome.

"It's Thanksgiving every day to us, but I don't think we'll ever, ever celebrate Thanksgiving the way we normally do no more," Ms. Towns said with regret.

They are asking anyone who can find it in their hearts to donate, to consider giving.