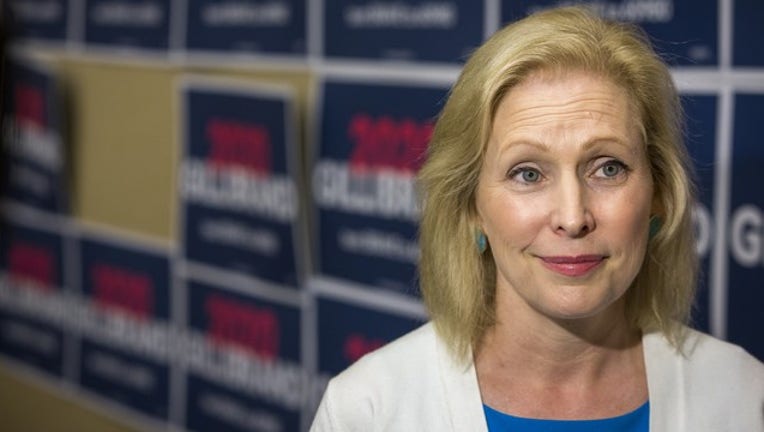 WASHINGTON (AP) - Democrat Kirsten Gillibrand is dropping out of the presidential race as a campaign that once looked poised to ride strong #MeToo credentials to formidability was instead plagued by low polling and major fundraising struggles.

The 52-year-old New York senator said Wednesday that she was suspending her campaign. That comes after failing to meet minimum thresholds for required numbers of donors and polling to qualify for the September Democratic debate in Houston.

"I know this isn't the result that we wanted. We wanted to win this race," she said in an online video. "But it's important to know when it's not your time."

Gillibrand topped an incumbent Republican in a conservative part of upstate New York to get to the U.S. House in 2007, and was appointed to the Senate two years later, filling the seat vacated by Hillary Clinton, who was tapped to be U.S. secretary of state. Gillibrand later easily retained the seat during a 2010 special election, as well as in 2012 and 2018.

Vocal in the Senate on curbing sexual harassment and promoting equal pay for women and family leave, Gillibrand made those and her staunch defense of abortion rights the core of her presidential bid. She stood out in the crowded field by becoming the first Democratic presidential hopeful to declare that she'd only appoint judges to the Supreme Court who consider the landmark 1973 Roe v. Wade decision legalizing abortion nationwide settled law, though most of her competitors quickly followed suit.

After forming an exploratory committee in January and formally entering the race by calling President Donald Trump a "coward" in a March speech delivered near the New York City skyscraper bearing his name, Gillibrand began with $10.5-plus million left over from her 2018 Senate campaign in her presidential campaign account.

That seemed like more than enough resources for the long haul. But Gillibrand was the first Senate Democrat in December 2017 to call for Minnesota Sen. Al Franken's resignation amid numerous allegations of sexual misconduct, and she has said for months that that alienated donors and some voters in his neighboring, make-or-break Iowa.

Many of her Senate colleagues seeking the Democratic presidential nomination -- including Elizabeth Warren of Massachusetts, Cory Booker of New Jersey, Kamala Harris of California and Bernie Sanders of Vermont -- followed her lead in calling for Franken to step down before he quit in January 2018. But Gillibrand has continually faced more questions than others about being too quick to condemn him.

Speaking in Manhattan in July, Gillibrand said she didn't regret urging Franken's resignation but argued that female senators were being blamed more than their male colleagues for a decision that Franken himself ultimately made.

"Women are asked to hold accountable their colleagues. The men are not," Gillibrand said. "It's outrageous. It's absurd."

A record 100-plus women were elected to Congress in 2018, and (hash)MeToo seemed to provide a clear lane for 2020 success. Gillibrand failed to catch fire, though, despite embracing feminist issues. This month, she visited St. Louis, home to Missouri's lone remaining abortion clinic, to decry efforts by Republican-controlled legislatures around the country to restrict abortion -- after previously visiting Georgia's state capital for the same purpose.

During a Fox News town hall in June, Gillibrand said, "We want women to have a seat at the table," and when moderator Chris Wallace responded, "What about men?" Gillibrand shot back with one of the most memorable lines of her campaign: "They're already there -- do you not know?"