Democrats rammed a package of ground rules for their impeachment inquiry of President Donald Trump through a sharply divided House Thursday, the chamber's first formal vote in a fight that could stretch into the 2020 election year. 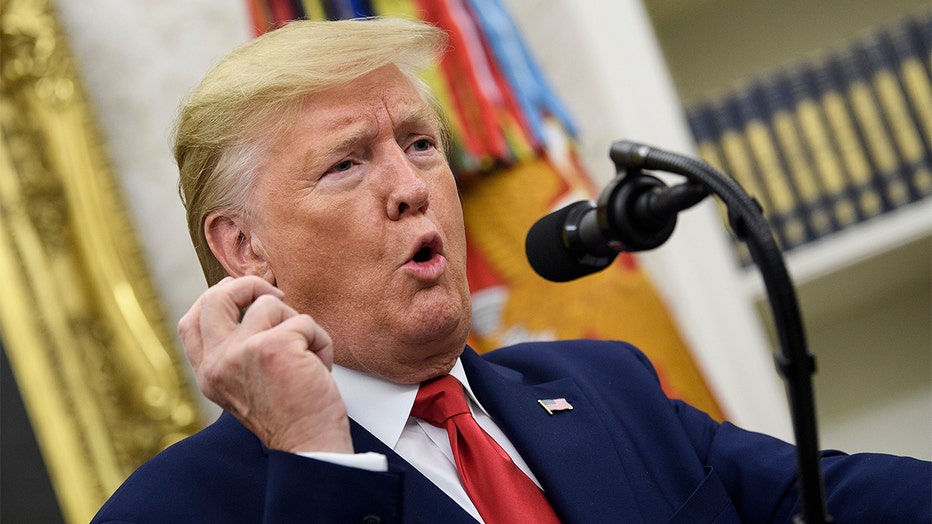 US President Donald Trump speaks during a Presidential Medal of Freedom ceremony for Roger Penske in the Oval Office of the White House October 24, 2019, in Washington, DC.

For only the fourth time in U.S. history, the House of Representatives has started a presidential impeachment inquiry. House committees are trying to determine if President Donald Trump violated his oath of office by asking a foreign country to investigate a political opponent.

Split almost entirely along party lines, the house approved the resolution, formalizing the inquiry and setting the rules for the next steps.  Every Republican voted against the resolution. Two Democrats also voted "no."  In part, the move clears the way for public testimony from key witnesses and allows President Trump's legal counsel to participate in the proceedings. Democrats and Republicans were locked in fiery debate leading to the vote. “I don’t know why the Republicans are afraid of the truth, every member should support allowing the American people to hear the facts for themselves," said Speaker of the House, Nancy Pelosi.  "That is what this vote is about, it’s the truth.”

The inquiry centers around the President's July phone call with the Ukraine and accusations he used his office to pressure a foreign power to investigate Joe and Hunter Biden. House Republicans insist the President did nothing wrong and accuse the Democrats of operating an unfair, closed door investigation, fueld by partisanship.  "It is about the integrity of our electoral process" said House Minority Leader Kevin McCarthy.  "Democrats are trying to impeach the president because they’re scared they cannot defeat him at the ballot box.”

Republicans argue the rules of the impeachement are skewed against them and lack due process.  Santa Clara University law professor Deep Gulasekaram says the Constitution does not lay out rules of what an inquiry should like, only that the House gets to set them. “The House can proceed as it wants," said Gulasekaram.  "This vote, certainly makes it clear the House is ready and looks like they have the votes to impeach the President when that time comes.”

After the vote, the President tweeted, "The greatest witch hunt in American history."

The White House released this statement,"With today's vote, Speaker Pelosi and the Democrats have done nothing more than enshrine unacceptable violations of due process into House rules.  Speaker Pelosi, Chairman Schiff and the Democrats conducted secret, behind-closed-door meetings, blocked the Adminstration from participating, and have now voted to authorize a second round of hearings that still fails to provide any due process whatsoever to the Adminstration.  The democrats want to render a verdict without giving the Adminstration a chance to mount a defense.  That is unfair, unconstitutional, and fundamentally un-American."

Professor Gulasekaram stressed how important it is for Americans to pay attention to what happens next. “Impeachment is ultimately about a representation of what the American people believe about their president and the conduct of their president in office," said Gulasekaram.

A quick summary of the latest news:

WHAT YOU NEED TO KNOW

— Democrats pushed a package of ground rules for their impeachment inquiry through a sharply divided House Thursday, the chamber's first

Robert Blair, assistant to the president and senior adviser to Acting Chief of Staff Mick Mulvaney is scheduled for a deposition Friday.

In the first House vote focusing on impeachment, two Democrats broke ranks and voted against the measure. Both represent districts won by Trump in 2016: Peterson of Minnesota's 7th District, where Trump won by nearly 31 percentage points; and Van Drew of New Jersey's 2nd District, which Trump carried by nearly five points.

Explore the House vote and which presidential candidate carried each district in 2016 with this online tool: