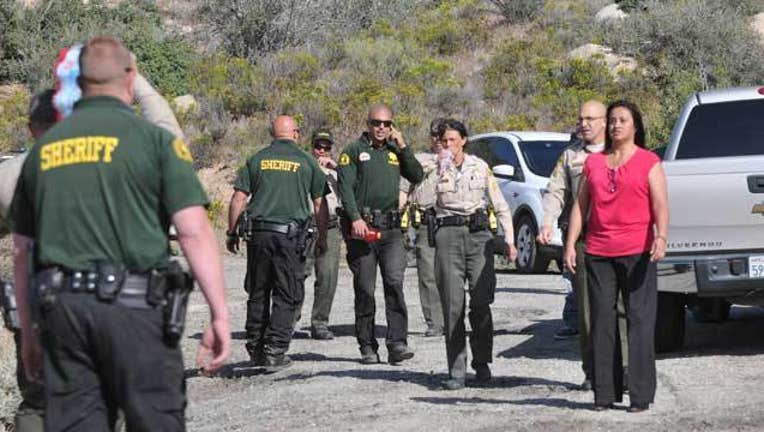 SAN BERNARDINO, Calif. (AP) — A Southern California sheriff placed 10 deputies on paid administrative leave Friday after a TV station recorded several of them kicking and punching a man following a 2½-hour chase during which the suspect rode away on a stolen horse.

San Bernardino County Sheriff John McMahon said the video "disturbed and troubled" him and appeared to show an excessive use of force.

McMahon announced the action after 30-year-old Francis Pusok was arrested Thursday by deputies in a violent encounter filmed by a KNBC-TV helicopter. Pusok fled by car and then on the horse, traveling several miles while deputies chased him on foot after trying to serve a search warrant in an identity-theft investigation.

The video shows Pusok, dressed in bright red clothing, falling from the horse as a deputy ran up and fired a Taser. McMahon said the Taser was believed to be ineffective because of Pusok's loose clothing.

As pursuing deputies reached him, Pusok was face down with his arms and legs outstretched and hands behind his back. One deputy kicked him in the head or shoulder area and punched him, and another kicked him in the crotch. Other deputies arrived moments later.

McMahon said internal and criminal investigations are under way. The FBI announced Friday it was starting a civil rights investigation.

"I'm asking for some patience while we complete a thorough and fair investigation," McMahon said. "I am disturbed and troubled by what I see in the video. It does not appear to be in line with our policies and procedures.

"I assure you, if there is criminal doing on the part of any of our deputy sheriffs or any policy violations, we will take action."

McMahon said the department received multiple threats after the video was aired. He said names of the deputies, including a sergeant and a detective, won't be released until the threats are checked out.

Attorneys for Pusok told KNBC-TV Friday as they left the jail that their client has a badly swollen eye, marks from the beating over his face and body, and is in pain.

"He remembers being beat, and he remembers that he wasn't resisting, that he laid still, he complied immediately. He says that he didn't even move a muscle because he didn't want to be continuously beat, yet it still happened," attorney Sharon Brunner said.

After the beating, a deputy whispered in his ear: "This isn't over,'" attorney Jim Terrell said.

"And that's why he's scared to death for himself and his family right now," Terrell said.

The American Civil Liberties Union released a statement saying it is "deeply troubled by the video images" and applauding McMahon's call for an investigation.

The beating is the latest in a string of recent videotaped incidents involving police officers using extreme force on suspects, including the shooting death of an unarmed man as he ran from a police officer last weekend in North Charleston, South Carolina.

Ken Cooper, a New York-based use of force expert who trains police, said it appears the San Bernardino deputies allowed their emotions and adrenaline to get the best of them.

"When chasing a fleeing suspect, in high stress, you have to control that," he said. "The justification for using force is to gain compliance from the suspect, and the suspect seems to be complying. So what this looks like is those blows are not justified, they're not necessary and they're not professional."

Cooper said the officers should be disciplined, retrained to deal with stress, and the video should be used for training.

Pusok has a slew of vehicle code violations and pleaded no contest to several criminal charges, including multiple instances of resisting arrest, attempted robbery, animal cruelty and fighting or offensive words, according to SanBernardino County Superior Court records.

McMahon said deputies had previously been called to Pusok's home when he allegedly made threats to kill a deputy and fatally shot a family puppy in front of family members. "We were very familiar with his aggressive nature," McMahon said.

Pusok is being held on suspicion of felony evading, theft of a horse and possession of stolen property.

Two of the deputies received injuries including abrasions, a twisted knee and hurt back from being struck by the horse.