TAMPA, Fla. - A deputy has been killed while on duty in Florida before his last shift heading into retirement, officials said. 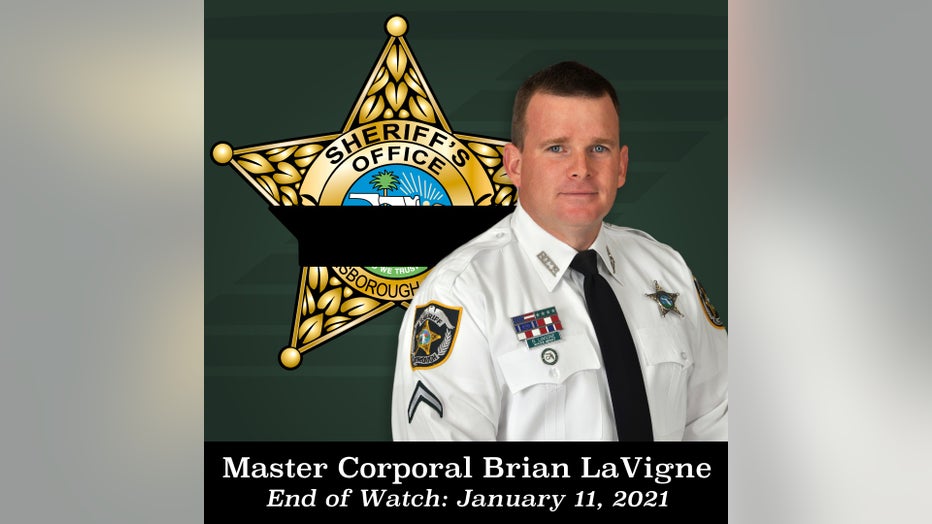 Florida sheriff's deputy, 54-year-old Corporal Brian LaVigne, was killed while on duty on Jan. 11. 2021. He was one shift away from retirement, officials said. (Hillsborough County Sheriff's Office)

A 28-year-old man was fleeing deputies when the suspect crashed a vehicle into 54-year-old Corporal Brian LaVigne’s driver’s side, Sheriff Chad Chronister said.

Authorities had been responding to calls about erratic behavior at an apartment complex when Travis Garrett attacked them, Chronister said. The suspect then got into a car and led deputies on a chase, investigators said. Garrett has been arrested in the crash.

LaVigne was taken to Tampa General Hospital, where he died of his injuries.

A video posted on the sheriff's office's Facebook page on Tuesday showed LaVigne's flag-draped coffin being escorted by a motorcade from the hospital to the medical examiner's office.

"Master Corporal Brian LaVigne was a part of the Hillsborough County Sheriff's Office family since 1990, and he was just one shift away from retirement," Chronister said. "We will never forget Master Corporal LaVigne for laying down his life in the line of duty or the response of his squad members who did everything they could to ensure that the individual responsible for his death was apprehended."

LaVigne is survived by his wife and two daughters.

KTVU contributed to this story which was reported from Tampa, Fla.