OAKLAND, Calif. - An Alameda County sheriff's deputy who was seen on his own body camera video initially shoving the Toronto Raptors president last summer during the NBA Finals is now comparing that situation to the terrorists who murdered 11 Israeli athletes at the 1972 Munich Olympics.

Strickland asserted that Ujiri - a man the Toronto mayor called one of the city's "finest" -- posed "the same threats" as these terrorists by ignoring commands to show his credentials, according to documents filed Monday in federal court by his attorney, Matthew Grigg.

Strickland is ultimately seeking to dismiss Ujiri's countersuit against him, where he also asserted he has qualified immunity, which shields government officials from being held personally liable for constitutional violations—like the right to be free from excessive police force.

"Had Deputy Strickland not employed force, he would have risked having the suspect not only trespass onto the court, he would have risked the suspect quickly getting lost amid the growing crowd of folks authorized to be on the court, and potentially committing any number of possibly serious crimes," according to Strickland's legal argument. "After all, this was a high-profile sporting event, which entailed a risk of crimes ranging from vandalism to assaults on players (e.g., the 1993 fan’s stabbing of tennis great Monica Seles), assaults on coaches (e.g., the 2002 assault of Royals Coach Tom Gamboa by two fans), player-fan brawls (the 2004 brawl involving numerous fans and players at the end of a Pistons-Pacers NBA game), and even mass murder or terrorism (e.g., the mass murder of Israeli athletes by terrorists at the Munich Olympics). The same threats persisted when Mr. Ujiri continued to attempt to barge past the second time, still without showing his (invalid) credential, even after being shoved and ordered to back up." 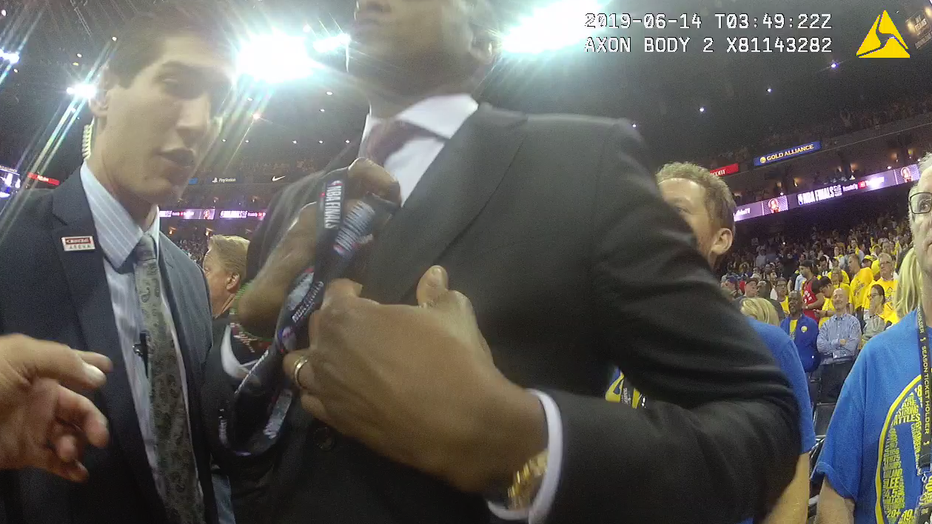 Majai Ujiri has his credentials halfway out of his breast suit pocket.

In August, Ujiri broke his silence on what happened from his point of view in June 2019, when his team beat the Warriors 114-110 in Game 6 at the Oracle Arena, describing the moments before and after he rushed down to the court to congratulate his victorious team.

Ujiri's legal team provided video of what happened that night, which was first reported by KTVU.  Simultaneously, Ujiri countersued the deputy, saying Strickland used "excessive force" against him and was "undeniably the initial aggressor."

Strickland first sued in March, saying Ujiri has a "predisposition for violence" and assaulted him on the court, causing facial injuries so bad, he hasn't returned to work since last summer.

However, Strickland is not backing down.

In his legal arguments, he said that Ujiri "twice tried to barge past courtside security anyway ... and swatted his hand away and tried to shoulder his way past." Strickland described his own actions as merely trying to offer "gentle physical guidance."

Even though it is clear that Ujiri was holding some sort of credential in his hand, which is evidenced in the video made public last month, Strickland accuses Ujiri of "not wearing any armband or even a lanyard with a credential on it."

Strickland's key argument is that Ujiri needed to be wearing a bright gold armband for access, which he in fact did not have. Ujiri's credential appears to be purple on a dark blue or black lanyard. In Oakland police reports, a Toronto Raptors executive admitted that she had not given the gold armband to Ujiri at the game. Ujiri's legal team has argued the president had an "all-access" credential and a gold armband is a moot point.

Strickland said that a private security official spoke to Ujiri, explaining that he wanted to check his credentials “real quick.”  But Ujiri completely ignored him and continued past, Strickland alleged. However, the video shows that this security guard is not looking in Ujiri's direction at the time.

Strickland argued that he "ultimately had to shove him in the chest to prevent the security breach. Predictably, neither open-handed shove to Mr. Ujiri’s chest caused any injury. But Mr. Ujiri then decided to assault Deputy Strickland anyway. Apparently for public relations reasons, now asserts an assortment of false allegations in counterclaims."

In 1994, Strickland was arrested on insurance fraud and false statement charges, and pleaded no contest to the first crime in 2005, KTVU first reported in March.

Because it was downgraded to a misdemeanor, Strickland was able to maintain becoming a law enforcement officer.