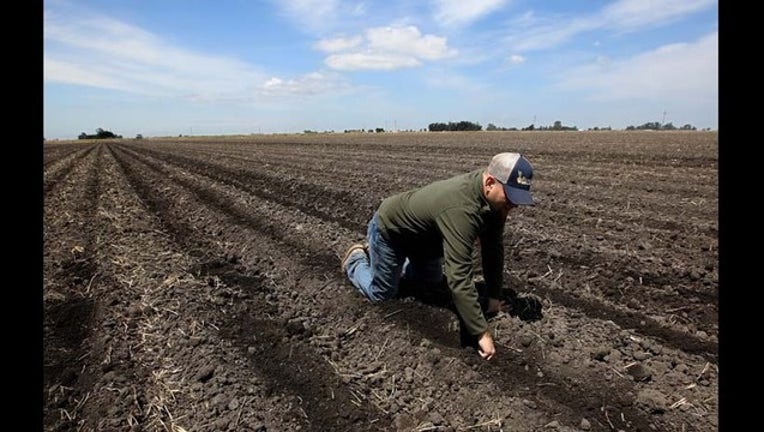 Gino Celli, who relies on senior water rights to water his crops, checks the moisture of land just planted with corn seed he farms near Stockton, Calif. (AP Photo/Rich Pedroncelli,file)

As of January, water users in California's cities and towns have managed to use 24.8 percent less water since mandatory conservation began last year, the State Water Resources Control Board said.

That just misses the level Gov. Jerry Brown had ordered in what is now the state's fifth year of drought.

"Our numbers have slipped rather than plummeted," water board chairwoman Felicia Marcus said. "Let's just keep it up" on conservation.

The latest numbers mark the first time since June that urban Californians have missed the overall mandatory water-conservation target.

Water officials blamed warmer weather in January for urban users' slipping in conservation efforts, which have included cutting back on watering lawns and stricter enforcement for wasteful users.

For the month of January, the conservation rate was 17.1 percent less when compared to the same period in 2013. That's down from December's savings rate.

A strong El Nino weather pattern this year has brought parts of the state up to normal levels of rain and snow, but fallen short of the big storms that state officials say would be needed to bring California out of drought.

California cities and towns overall have saved 1.1 million acre feet of water since January, putting them at 96 percent of another state conservation goal. That's enough to supply water to between 1 million and 2 million households for a year.