TAMPA, Fla. - The state of Florida is now warning school board members in Hillsborough and Sarasota counties that they could face a financial penalty for imposing mask mandates amid the current COVID-19 spike, despite a judge’s ruling last week.

Hillsborough County mandated masks for all students back on August 18 as more than 10,000 students sat at home, quarantined or isolated just days into the school year. Two days later, following a raucous meeting, Sarasota implemented the same policy.

In both cases, parents cannot opt students out of wearing masks unless they get a doctor’s note. That violates the governor’s executive order, issued July 30, which said mask decisions must be left to parents, not doctors.

A Florida judge ruled Governor Ron DeSantis' executive order banning mask mandates in schools was unconstitutional while also rejecting many of the anti-mask claims DeSantis made when issuing the ban back in July.

Corcoran's letter to the two districts orders the superintendent and school board chair to come into compliance by Wednesday or face possible penalties, including losing state funding for board member salaries.

Sarasota School Board member Bridget Ziegler told FOX 13 she voted against a mask mandate because was concerned about blowback from Tallahassee.

"I think that there was a lot of reactionary policy. And unfortunately, I think we're seeing the consequences of that," she said.

A Florida judge ruled Governor Ron DeSantis' executive order banning mask mandates in schools was unconstitutional while also rejecting many of the anti-mask claims DeSantis made when issuing the ban back in July. The judge also ruled penalizing districts that pass mask mandates is against the law.

At least a dozen other school districts across the state – including some of the largest in the country – have since enacted similar policies, bucking the governor’s order as isolation and quarantine numbers grow among students and staff.

The state, at the urging of Education Commissioner Richard Corcoran, has begun withholding school board member salaries in Alachua and Broward counties.

"To date, a signed written order has not been issued. At this point, we will continue to act with urgency to protect the rights of parents and students. We will not let up, and we will not stop holding elected school board members who refuse to follow the law accountable," Jared Ochs, a spokesperson for the Florida Department of Education, said in a statement to FOX 13. 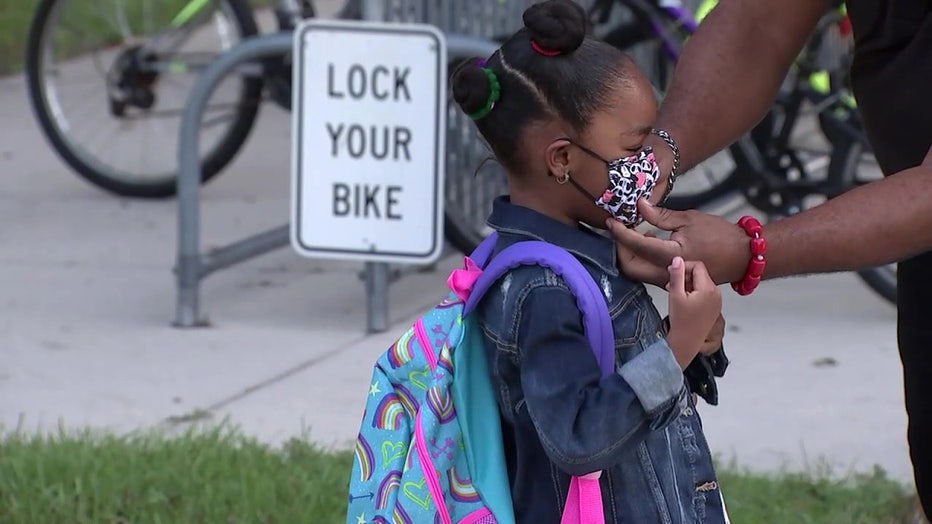 Board members from both districts worried about the impact the move would have on students.

"Withholding funds to penalize local districts for making decisions at the level that we need to to do what we think is just keeping our our our children and our schools safe is a disconnect for me," said Hillsborough School Board member Jessica Vaughn, who voted to pass the district's face covering requirement.

"Certainly we understand there's some that there's a little ongoing litigation on some interpretation and authorities. But at the end of the day, we can't stop everything because our children are in school," Ziegler added.

The commissioner's move comes after Friday’s ruling in a lawsuit filed by parents against the state. Judge John Cooper said he would grant an injunction against the state Board of Education after he determined that Gov. Ron DeSantis not only exceeded his authority when he issued the order, but the anti-mask evidence presented by the state was flawed and, in some cases, actually supported the use of masks.

He also ruled that the governor's order violated Florida’s Parent’s Bill of Rights, the legislation that the state had claimed actually permitted it.

"Parents' rights are very important but they’re not without some reasonable limitations," usually in regard to health care or safety, the judge noted.

DeSantis has already said the state will appeal the ruling.

"If they continue down this path of trying to enforce an executive order which now has been deemed unlawful and they continue to appeal, you’ll probably at some point see an investigation opened up in Florida as well," Fried said.

Critics are also taking aim at state lawmakers who aren't releasing federal COVID-19 relief funds to districts. Hillsborough, for example, is due about $400 million.

Christine Pushaw, a spokesperson for Gov. DeSantis, told FOX 13 the state is working with districts using the first two rounds of federal COVID relief funds, known as ESSERs I and II funds. She noted Florida is in line with spending by each state and ahead of larger states, including New York and California.

Pushaw indicated the state is not yet ready to allow districts to access their portion of the third round of funding.

"The notion that districts need to begin tapping into [American Rescue Plan] Act (ESSER III), which is the third phase of funding, is premature by months, if not longer," she said in a statement. "Instead, Florida’s school leaders should be commended for making ESSER I funds last through the 2020-2021 school year and managing these resources wisely. It would be irresponsible to wastefully rush to spend these dollars before they are needed, as these funds are intended to address the full needs of educational recovery over multiple fiscal years."

The Biden administration has said that there’s a possibility they will reimburse districts that face cuts due to mask mandates.